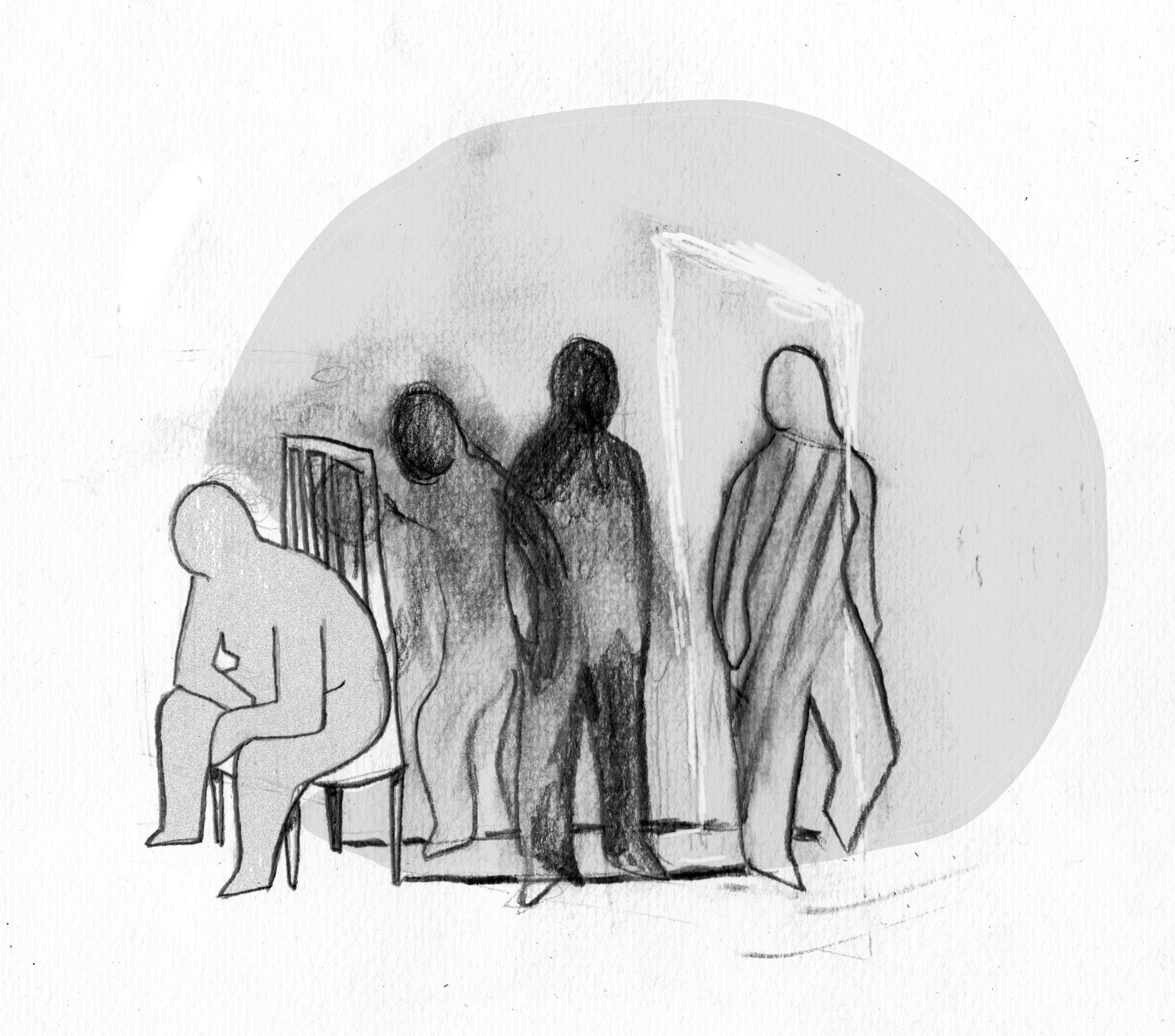 On February 27th 2022 he started a hunger strike. After one month, he is transfered at the hospital due to his health condition. He’s finalement released on last April 7th. The militant was among the accused of the December 8th 2020’s arrest. As a reminder the Raid and the DGSI (= SID?) had stopped at the same time nine persons in all of France (Dordogne, Rennes, Paris and Toulouse). They were accused of being part of criminal groups conspiring terrorist undertakings. Months after months the accused were set free.

Libre Flot’s lawyer reports a political affair beyong the judicial one :” Libre Flot pays the price of SID’s choice few years ago, which is to targetting left hand militants who went and fight in Rojava, northern Syria with YPG’s Kurdish fighters. […] A political police needs to tell, to propose a narrative. Regarding libre Flot this story is a bit the keystone.“

If you want to know more about how the case is going on, we invite you to read the support committee’s page :

Becoming more and more regular in France and abroad, those arbitrary arrests aim especially to weaken libertarian and anti-authoritarian spaces. For a “temporary” detention is already a sentence in itself. Even when liberations were under judicial supervision because of the lack of concrete evidences, those months of detention will have left traces. With all traumas resultant on both physical and psychological level.

This is why we chose here to share an excerpt behind bars. Because prison and confinement should not be only abstract concepts for people who have never lived this hardship.

Our solidarity with all the prisoners and people enclosed.

It has been for one month and an half now that my envy to write about isolation showed up and tickled me. But I can’t set to work, I can’t focus enough. Either my spirit disappears into thin air like a little cloud or it condenses itself into a kind of molass so dense that everything is blocked in my brain which is giving me headaches. Even though the first one can be softer (as when you’re stoned until being stupefying), those two situations bring me a painful feeling.

Indeed to realize its loss of intellectual ability and then to witness its own decrepitude, are one of an entiere and particular violence. It’s in that mental condition I get on with the production of this text.

The will to do like an updating of the situation comes from the brutal analysis of its worsening. New symptoms appear while, without paying attention, old ones get both stronger and worse. When you realize you have completely forgotten that two of your friends (co-accused) have been set free (under legal constraint) whereas it was the only good new since your detention, that is a real electroshock. The brain begins seriously to go wrong. Problems of concentration, difficulties to build a reflexion, the torpor, the loose of time markers, headaches, vertigo. Far from diseppear with time, all of thoses symptoms already mentionned above were intensifed and generalized. They became the ordinary or the normality. But to those symptoms must be added others. Before quoting them, one thing must be understood : each time a new symptom, a new evil appears, we told ourselves it’s temporary, we wait until it goes away. But no ! Every new trouble appearing is just a glimpse of what is going to setting up in the long term and becoming more and more present. Then those new “comrades” are:

The loss of memory, so out of it, with no exchange with people and no stimulus, things leave no marks. Information during calls, visiting hours, readings, get in and out without leaving any marks or hardly a vague sensation of something intangible. It’s very simple, if I don’t immediatly write down my hours of sport and oppressive time of the day, the next minute I can’t remember them…

Besides there are visual troubles : it is now impossible to see a straight floor on level ground. They lean in every which way in the same time and they are never the same. We could have fun trying to guess which sides a ball will go to if it was on the ground. None of them would be surprising. But well balls are forbidden, even DIY ones.. smarts !

An other one more alarming is the one due to a strong chest pressure going along with a sharp pain in the heart, like a spike sticks in it.

The impression that the heart doesn’t beat faster but harder as if it wanted to go out of the chest with a sense of anxiety. And that even during moment of relaxation like the sesion of taï-chi-chuan and medidation. This pain will last an entiere month continously before it goes away and comes back on occasion to visite me unexpectedly.

But there is also the issue to access to its own brain. It becomes usual when someone speaks about one subject or another to know that you have the knowledge about it but that it remains inaccessible , the link to reach it is broken, it doesn’t connect.

Error 404 some would say… And the fear insinuates itself. And if it wasn’t the path you couldn’t find anymore but rather your knowledge that unraveled itself and disappeared?

As I said above, to all those things you can add the analysis of that situation which in itself leads to its set of psychological suffering.

What do we do then ? Worry, ask for a doctor ? Yes, but in solitary confinement, it’s very complicated to go to the medical aisle. Some will argue that a doctor comes twice a week in C4 (the solitary confinement block in the penitentiary centre of Bois d’Arcy). They do, but in super-speed mode, in the hallway accompanied by warders, without being able to guarantee a minimum of medical secrecy, and only gets enough time to note two or three things and hand us a doliprane while telling us that here (in solitary confinement), you easily get headaches. Getting an appointment isn’t always easy, but it’s even harder to actually being brought to it.

In order to get someone out of C4, the whole detention zone must be blocked, which hinders the functioning of the prison centre. Everything must be closed and unaccessible during the trip out, even to sight. We must be certain not to be able to see or be seen by another inmate. The fact that we have to be escorted by a warder during the whole trip and the appointment makes the logistics complicated and asks for more staff. Therefore, it is much easier to just leave the inmate to their ever-fading hope, watching the minutes go by on their watch, until they finally realise that they won’t be able to attend their long awaited appointment.

My dentist appointment has been delayed twice because nobody took me to it, when the dentist and I were waiting. Ever since the beginning of February, I have been asking for a psychological counselling, and as the end of June approaches, I am still left with no horizon. My appointment with a general practitioner happened after a month of repeated demands, but mostly thanks to the intervention of my lawyers.

The doctor told me that everything I was complaining about had been caused by my solitary confinement, that it was normal to feel this way in this kind of situation, and that it would all go away when I get out, without giving me a medical certificate or written proof of these statements… I therefore guess that all the people in solitary confinement suffer from these symptoms, and their sufferings are belittled. « It’s normal, it’ll pass ».

It’s as if those serious disorders, both physical and mental, were discredited. It’s as if they told me « You’re suffering, we don’t care, it’s nothing serious ».

Well it is serious, and even if it did pass when I get out, well no, it is not normal to feel this way. To not provide a medical certificate is taking part in the existence of this suffering, it is being complicit of the torture. It’s interesting to see that the isolation causes psychological disorders, which cannot be treated correctly due to the fact that we are in isolation. It’s a vicious circle, an infernal spiral. It’s such a nonsense that it’s hard to think that it’s accidental.

Now, a « system » has been established so that I can go to my medical appointments. We’ll see how it goes, since the occasion has not yet been presented to experience it.

This is a luxury that I obtained du to the fact that I’m a pain in the ass concerning my rights, or as the direction would put it : « Very demanding about my detention conditions ». Here, the respect of the inmate’s human rights is to be begged for, it doesn’t apply automatically, and to simply call on common sense and courtesy for it to be respected is just as efficient as pissing in the wind. My vegetarian diet, more or less effective, was merely respected after I had to quote the law and threatened to call my lawyers. The hi-fi problem, as well as the medical appointments questions, was the same : « lawyers ! ». So that’s the « what do we say ? » here. In here, it’s not « thanks », or « please », it’s « lawyers ! ». Even though it’s not surprising, it is appalling to realise that the prison administration imposes an antagonist report, and that every thing must be managed through power relationships.

I am aware of my privileges regarding these matters, I have two determined lawyers fighting for my rights to be respected. It is a luxury that very few people have here, I guess. I am also privileged to speak, read and write in French so that I am able to clearly express my revendications and to justify their legitimacy. Because, if we can claim so things to the warders, the only official and acknowledged way to file complaints is by writing. I cannot imagine the struggle it is for those who don’t speak the language or have difficulties writing in French and cannot, being in solitary confinement, ask for the help of a fellow inmate.

The prison administration being an administration, the patience we acquire through time isn’t the least of qualities, like the capacity we learn to adapt to this protocolary system. I wonder how a person that has no lawyer and doesn’t speak French manages to make their rights respected without losing patience.

And if they do lose their patience, how does it end ? What potential drifts, what consequences ? Don’t we already know ?

My mental health goes up and down, with moments of quasi-euphoria (which isn’t particularly reassuring), and moments of total demotivation and demoralization, without anything happening in between or anything to justify these mood swings. The psychological situation in unstable, I rejoice when things are « alright », while simultaneously dreading the storm to come…

This text is not meant to explain the functioning of a prison or to be representative of what living in solitary confinement is like. It does not have the pretension to theorise the official and unofficial mechanisms, the repressive « tools » that are used to shatter the inmates’ determination. Some have already done it admirably.

This only has the value of what it is : the testimony of a particular person, at a given time, in a given place, not more, not less.