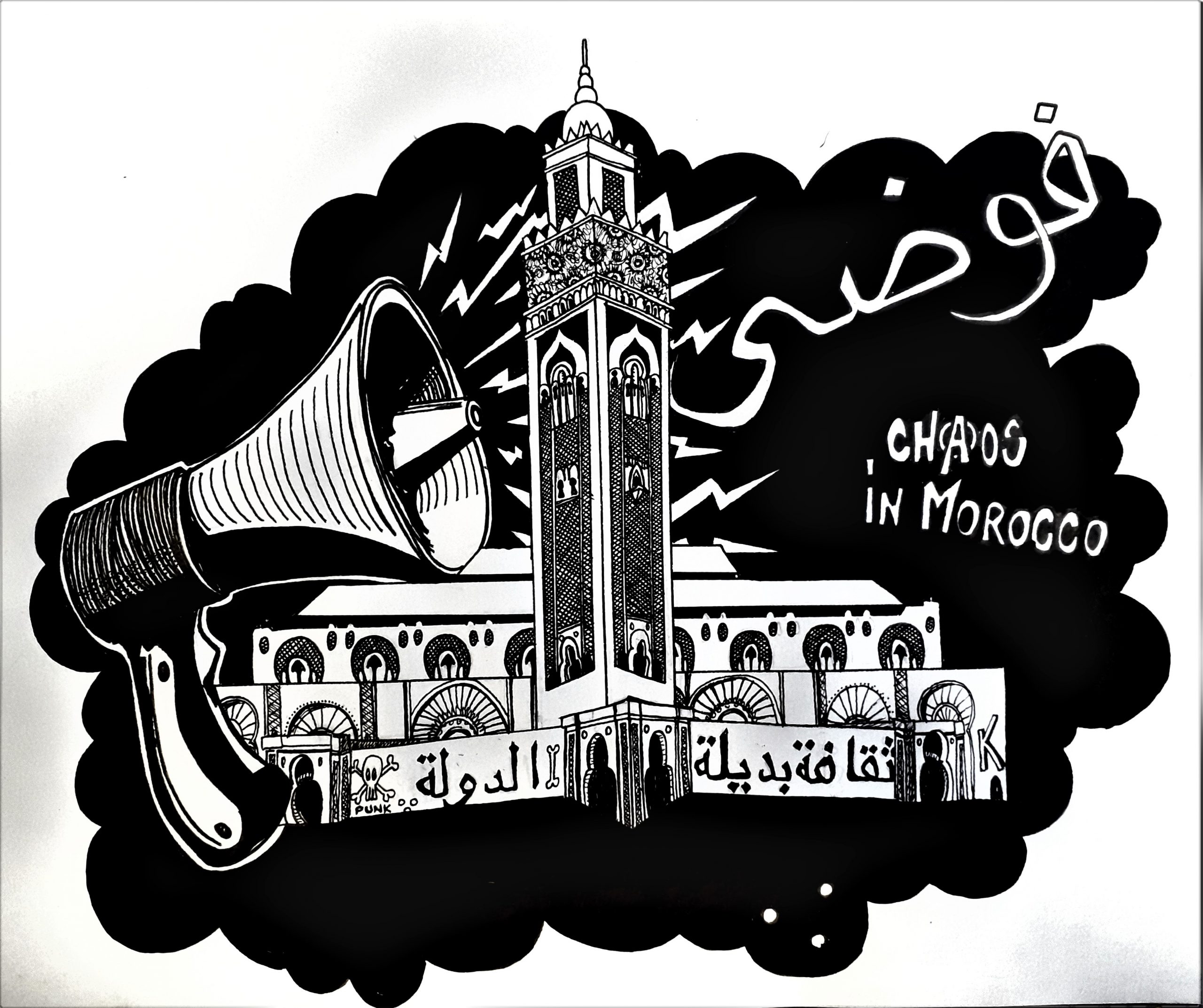 A monarchy, a religious state, a youth in crisis and eager for change.

A documentary by the french Clotilde Mignon and Svink.

“Such is the environment in which a handful of young punks are trying to make their voices heard in Morocco. It is through them that we discover this surprising and rebellious alternative scene in the face of a country where freedom of expression is weaker than we would like to hear?

Punk, this saturated and out of the ordinary genre allows them to express themselves, criticize, analyze the society around them, while sharing a common pleasure with the public, the freedom of a moment…
From Agadir to Rabat, via Casablanca and Ouarzazate, what started out as a simple journey has turned into an encounter with the origins of punk, the will to change through freedom of expression.

5 years later, we met Clo and Svink to talk about their experience, the conditions of their shooting, and share some anecdotes! | By Alkistis A. / Trad: Alkistis A. / Draw: Mademoiselle Pin

Can you introduce yourselves ?

Clotilde: My name is Clo, I work in the cinema and it’s also for this reason that we made this documentary, because wherever we go, I always have access to a camera !

Svink: I work in show business. We’re part of a collective that has been organizing concerts for a long time. That’s why we chose this punk theme. It’s a subject that fascinates us.

What gave you the idea to make this documentary?

C: We went to Morocco for the first time in 2014. We traveled together in a truck for a month and a half. We visited the cities and the countryside. It was only at the end of the trip that we said to ourselves that we hadn’t really seen any concerts. So, we had a few preconceived ideas, as if it was unlikely that we would see any local punk shows. At the same time, we knew we were going to go back the following year. Just before we set off again in 2015, we did a bit of research on the Internet, focusing more or less on Casablanca and Rabat. The idea was to combine holidays with concerts. As time went by, we got the urge to take things a bit further. We got in touch with a few actors from the scene and, why not, go out and interview them. Basically, it was unpretentious, just doing little interviews with people we met. As we met people and visited places, the documentary built itself up!

How long did the filming take?

C: We stayed one and a half month on location. It was in February 2015, just 5 years ago. We thought it was important to go back there to film concerts and see the people we had met. I came back alone in November to film a big concert in Casa. Svink’ also came back to finish some shots in April 2016. In all, the shooting took about two and a half months!

Do you have any anecdotes about the shooting? Any situations that you couldn’t have experienced in France?

C: Yes, we had a little history with the police in Casablanca! We started the interview at Khalil’s house, the singer of Riot Stones, and I offered him to finish it downstairs in an outside bar to make it more fun. So we went down from his place without our stuff. They’d just taken a jacket and we’d taken our bag with the camera and the stand.
I filmed them to get some footage of them on the street. Immediately, a passing police van turned around. A few minutes later, they stopped us for an identity check. It lasted quite a while because our friends didn’t have their papers with them. Same with us. But the real problem wasn’t the papers. It was because we were filming Moroccans with retractors and tattoos!

S: Let’s say we were filming in a working-class neighborhood and that according to them, these were not the “good images” of Morocco to show.

C: I quickly hid the memory card of what we had filmed, because if they checked the content (with all that Khalil was saying about police repression) it would have been really uncool for him. I put it in my pocket, we stayed two hours at the station and they finally released us.

S: It was more symbolic than anything else.

C: It made us understand that they don’t really want us to film without permission.

Why are the police so attentive to the activities of the alternative music scene?

S: On the surface, “anything is allowed”. But there shouldn’t be any offensive remarks about the king and the state. The nerve center of power. There are always plainclothes cops to report everything that happens. There are also problems of compatibility with religious morality. Anyway, it takes a lot of courage to organize concerts. There’s always some crazy process. And if you ever get permission, you’d better go straight! The authorities can also cancel your event at the last minute.

C: If they don’t like the lyrics of a song, you’ll have a problem with all the activities you do afterwards. Once you’re burned out, it’s even harder.

What are your impressions of the Moroccan alternative scene?

S: It’s very brave! Without wanting to make a comparison, you can easily buy an “alternative” image in Europe. In Morocco, they do it out of necessity. They really know why they do it, and they know the risks involved. What is interesting is that even people who are not necessarily activists have a huge thirst for culture. Alternative music fills them up. It brings a breath of fresh air that’s hard to find elsewhere. The more mainstream art scene doesn’t get in the way of power. It’s very conventional.

Has this experience changed the way you look at the Western punk scene?

C: It didn’t really change the way we look at it, but they transmitted so much energy to us that it strengthened our determination to see the documentary through to the end!

S: As concert organizers, it really helped us to put our little problems into perspective, that’s for sure!

We noticed that there weren’t many women in the documentary. Why do you think that was?

C: We had made about fifteen projections of the documentary all over France and that’s the question that came up the most. Let’s say that the European punk scene is also predominantly male. It’s also the case in Morocco, with far fewer musicians. I think the ratio is about the same. When we filmed in 2015, there weren’t too many girls (even though the former Riot Stones band had a female drummer). In the concerts we filmed, we noticed that there were quite a lot of girls. If we’d had the chance to include more female musicians in the documentary, of course we would have!

Why did you choose the title “Chaos in Morocco”?

C: We weren’t sure what to choose at first. After a few encounters, some Moroccan musicians told us about a vinyl that had been made by Luk Haas. He’s a traveler who works in the humanitarian sector. Wherever he goes, he tries to meet local punk bands, make a compilation and release it on vinyl.

S: In Morocco, this is the only punk compilation that has existed so far. It was for the wink of an eye!

Did you manage to release it in France?

C: We organized a lot of projections in 2016 and 2017. During two months, we almost did that! We were even able to show the film in big cinemas, like the Méliès in Saint-Étienne. It was really great. It’s calmed down a bit since… But that’s normal, we’ve set up other projects!

C: During our projections, we usually say that in Morocco, everything moves very fast. Five long years have passed since then! Of all the people we interviewed, only one is still living in Morocco. They have all gone all over the world: to China, Italy, Catalonia, France and Canada. Some of them told us that they wanted to stay in Morocco to try to change things, but most of them got fed up. They seized opportunities as soon as they could. Often to go and study abroad. Some groups no longer exist.

S: You shouldn’t watch the film thinking you’re getting a news item. Today, documentary is obsolete. It’s a picture of a situation at a given time.
C: Yes, it’s a snapshot of 2015! In a few months, the scene had already changed. For example, in the concert I filmed at L’Usine, I interviewed a young guy with a Ramones t-shirt, who said: “punk isn’t dead, he’s just asleep”. Two years later, he had formed his own band, he was a singer and I think he still plays. We felt that some people in the audience were dying to get on stage, and for some of them, it’s a milestone.