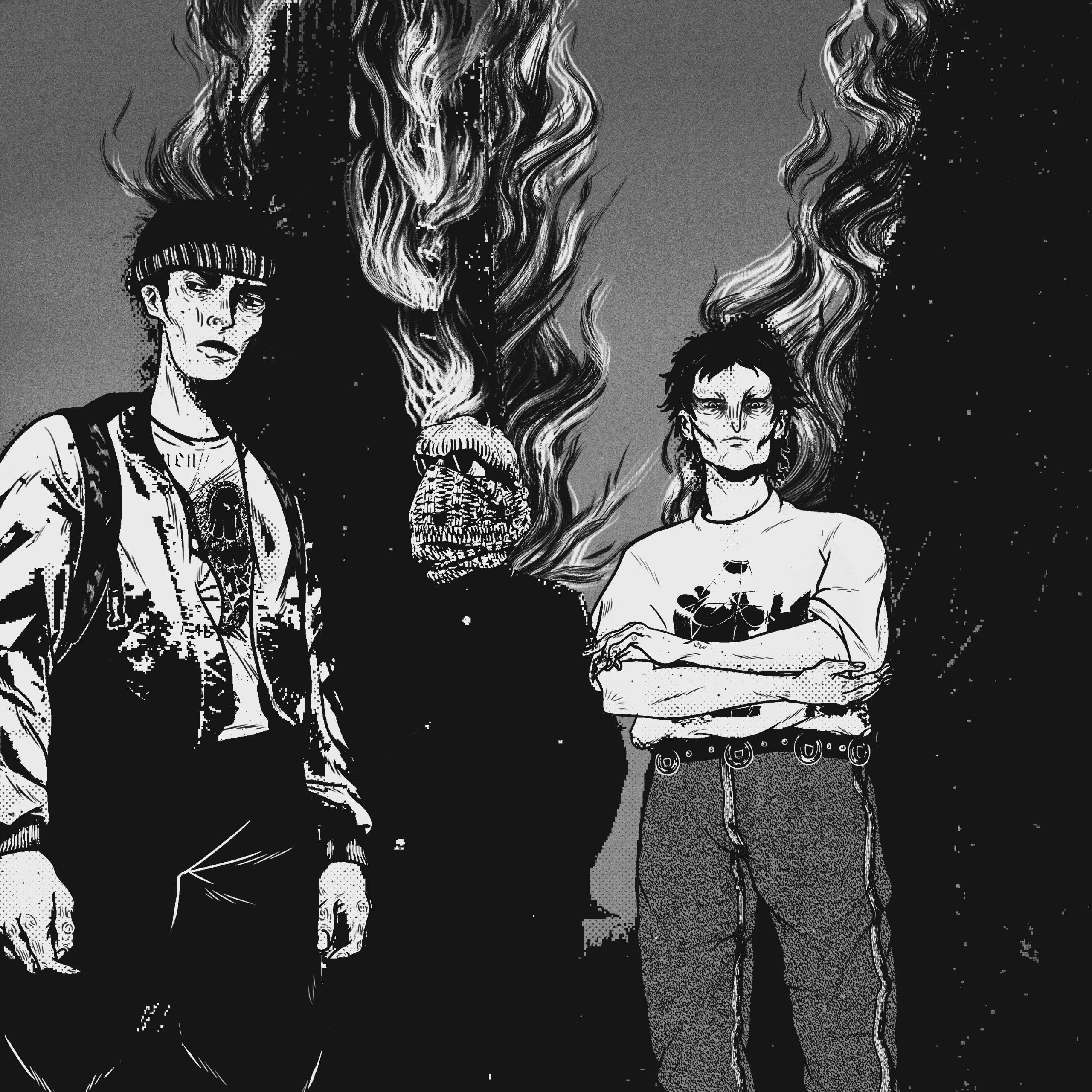 When we think to Punxo, we automatically think of the DIY Bologna scene in Italy! In 2019, we discovered the enclosure of the legendary self-managed place XM24 (since expelled), during the do it yourself festival “OLÉ – oltre l’editoria”. Marta “Punxo” designed the stunning poster for the event. We made a promise to ourselves: when we will make our own DIY fanzine, we’ll roll out the red carpet for her! Thank you to Marta for the original cover of this issue 5. Happy reading everyone, and good retina breakage… | By Polka B. / Trad : Polka B.

Can you introduce yourself as “Punxo”? Why this name? How would you define your visual universe ?

Punxo was born on the desks of my high school from boredom and frustration, the name was generated in those days, mixing the word punk / punx with my old nickname punto (dot in Italian).

We can define my visual world as a mob of caricatures trying to extricate themselves from an urban environment that I appreciate photographing and inserting into my drawings.

A series of suffering, but always colorful characters ready to break streets and cops though with a bit of paranoia and little self-esteem.

Who are the artists who’ve influenced you ? What are your sources of inspiration ?

I grew up reading lots of comics, especially Japanese auteur and manga. I would be foolish to deny the fact that this is the first and foremost influence of all, being a huge fan of animation as well.

Over the years, however, also thanks to my approach to the underground scene, I have known the characteristic crasis between music and graphics in punk, in the present as well back in the days; that consciousness for me was mind-blowing.

Another fundamental influence is the knowledge and the network of people I started to meet by attending festivals in Italy and abroad, talking, observing and getting to know many underground cartoonists and printers.

Naming a couple of artists’ names, I would certainly range from Go Nagai with his Devilaman and Yoshiharu Tsuge, Martin Lopez Lam, Robert Crumb, Anna Haifisch, Michael DeForge, Officina Infernale; as well as Martin H, the Discharge graphic designer, himself influenced by the German artist John Heartfield, to the collages / flyers of Crass, David King and Gee Vaucher; they are so many and so different.

My influences and inspirations are as chaotic and heterogeneous as the diversity of techniques and styles I use. I always try to include in my products the facts and things that I have urged to tell and express: a stimulating assembly, a joke made by a friend, a beer spilled on me at a concert, a caricature of a local politician who displays its liberalism every day.

You use a lot of different techniques. What’s your mood right now ?

I love to use different techniques and mix them up, it’s one of the most fun and challenging way to self doubt yourself when you are making some kind of “art”.

Even though I am open to experiment various techniques, I have found out in the last year that my place is going to be working both with my line and photo editing; it’s interesting to produce hyper-realistic and very cartoonish images at the same time.

I think this is the right mix between my influences coming from comics and the collage/flyer aesthetics of the punk hc scene.

For someone who does not know, how would you present the city of Bologna ? And its alternative cultural life ?

Bologna for me is an incredible melting pot.

An essential step in my personal growth as an artist and as a person with a critical and political thought.
Bologna has been and still is the pulsating center of a creative underground push, a unique one. I guess we can say that is alternative life is its true life, it’s everywhere and surrounds the whole city.
It is really a great network in which we meet, leave each other and find ourselves again thanks to concerts, distros or simple street encounters.
It’s really hard to explain such a massive, in change and explosive thing like that.

Can you tell us about the XM24 ? What did the place represent to you ?

I guess I can use only a simple word: home. XM24 was a beautiful mess of different individuals that were able, without any sense, to create something special and unrepeatable.

Xm24 was home not only for me, but also for so many people and realities.

From Olé-Oltre l’editoria (self-productions’/DIY festival) to popular gym, from the bike lab to the screen printing lab.

Despite having lived XM for a relatively short time, I never learned as much as in those days. thinking about it, I remember doing my first real self-production there, with other two friends, in the screen printing lab in the basement,

singing songs from Skruigners’ album ‘Duemilatre’. Xm24 was so much and still is.

After the destruction of the place, how do you see the future of the scene ?

I believe that the life of the scene doesn’t depend on the presence of a space, but I hope to have a new home soon, as soon as possible.

Moreover, in this period with Covid, it is difficult for me to see much further than tomorrow or the day after tomorrow.

Do you see gentrifictation as something inevitable in big cities ? What are the weapons of the DIY scene to continue to exist according to you ?

I have to say yes, unfortunately. We have seen gentrification spread from almost only big city to everywhere, from city centers to the suburbs.

Bologna is a victim of this process, we know it well from the XM24’s and other spaces’ eviction in the past years (Atlantide, Ex-Telecom and many more). We see it every day when a popular neighbourhood like Bolognina is starting to host skeletons of private speculation and lost places of horizontal sociability and sharing in the meanwhile. I think DIY is the only way to fight these processes, continuing to practice relations and exchange outside the capitalist market’s logic, claiming space in the streets and places that we live in.

What are your future plans ?

I’m currently working on my first long comic, it’s going to be soon self published and brought to festivals in Italy this summer. The comic is influenced by b movies and it’s a “serious” parody of them: a group of friends take a road trip without having any idea about what they are going to face. The story is about our self fears, materialized in different and personal ways.

Another project I’m working on is a collaboration with one of my dearest friends Cati Cardia, check her out, she’s terrific.

Can you give us a playlist of 5 songs that represent you well ?