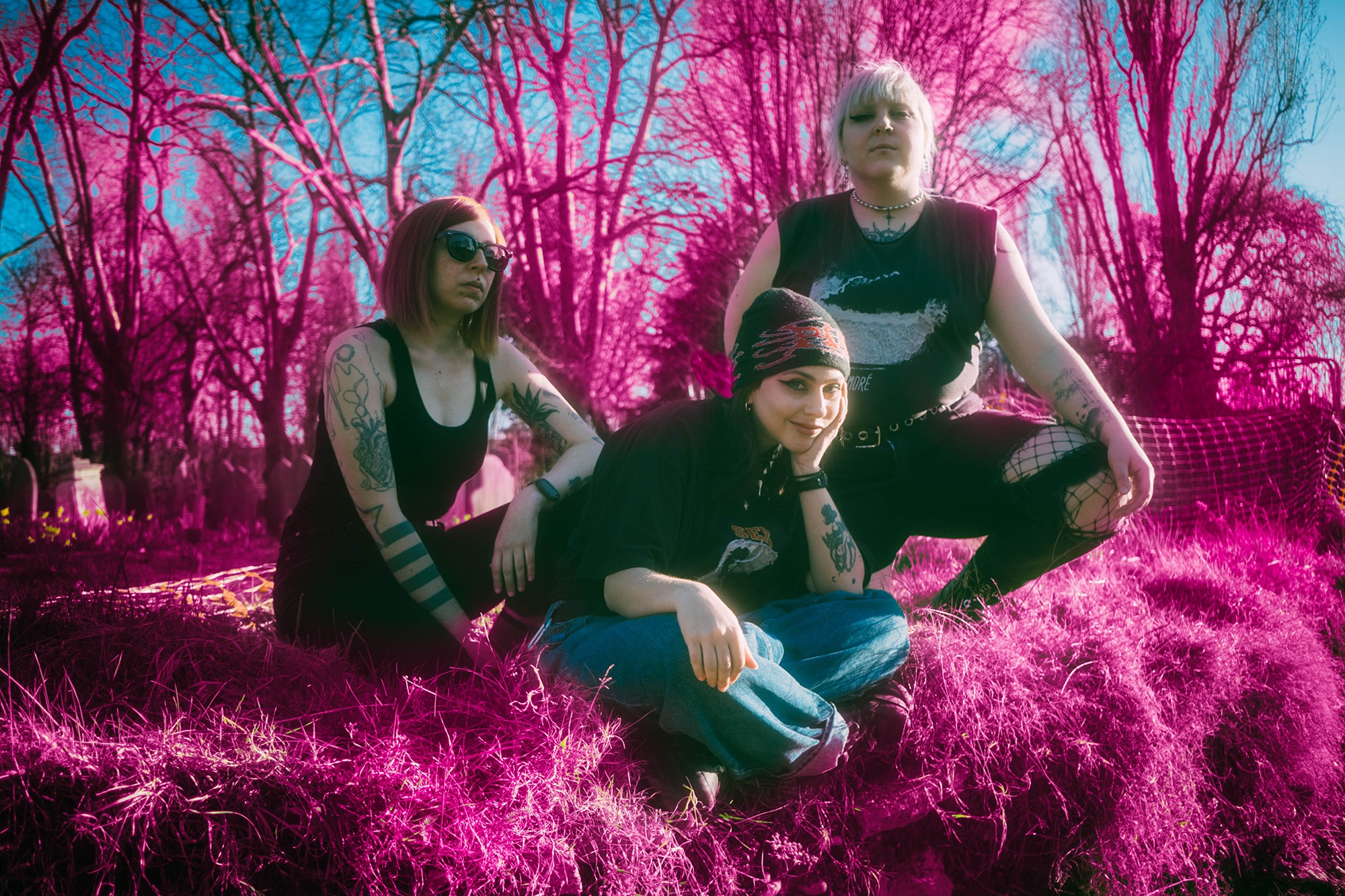 In the esoteric tradition, the athame is a hallowed dagger. Charged by the force elements as air and fire, it’s mostly used during pagan rites, like the ones from the wicca’s religion. It’s also associated with the east cardinal point of the magic circle delimitation.
| By Nino Futur

Suffice to say that with an outlandish symbolism as this for an EP name, we can easily get scared or start wondering what kind of flared pants wearers- occult rock those Shooting Daggers are going to bring to our ears…
None of this! Straightforward, social and certainly urban, the trio’s sound goes mostly on the hardcore-punk side of the chessboard and doen’t seem to have a strong link with occultism.

Formed in London in 2019, Shooting Daggers claims themselves queercore (the LGBTQI+/Queer side of the punk scene, eager to be detached of the « tough guy mentality » of the latter).

Pure product of the« world-city», the band does not include any native English in its ranks but rather an effusion of French, Italian and Spanish origins.

After a first demo released in 2019 (a real summary of efficiency), and few singles,the band pursued its way chaining many gigs in London and England, between clubs and punk fests.

It’s in 2021 after having signed with the metal/stoner label New Heavy Sounds, that the band goes one step further for the release of this famous “Athames”. As soon as the expeditive « No exit » comes in, as an intro we directly identify what awaits us for the next fifteen minutes to come.

Riffs, old school hardcore-punk structures, but above all, a good glaviot of feminist spite up the throat, ready to be spat at any opportunity in the some phallocratsfaces and other « liars » passing by.

The band use mostly its music to give a voice to an inclusive feminism and even define concepts quite specific into music « Manic Pixie Dream Girl » (internet this and you’ll understand).

With a relatively simple and efficient production sufficentto stand out, the EP sounds between cleaness and NWOBHC typed productions (New wave of British Hardcore for the ignorants, a pretty British trendy thing, about rethinking the 80’spunk productions despite the actual studio means), and the obvious influences of bands as GEL, Törso, Gloss can be felt with pleasure into the riffs ideas. Very punk in its approaches («You Can’t Kill Us » ; « Manic Pixie… ») sometimes crusty(« Carnage »), the EP showcases the raw energy of effective riffings, and sudden rhythmic accelerations-pounding, which can evoke Candy in some ways.

But where Shooting Daggers stands out is when they manage to insert a part of “tube” into their assaults. Making their raw music more accessible than we might think.

Take the single « Liar », between a post-hardcorsih riff, a tense-tempo, and vindictive words (a small pitfall for all bipeds with abusive behavior), the song although fundamentally hardcore punk, has an energy close to a pop song, which we could also compare to the Indie-Grunge-Noise approach of Gouge Away.

« We Will Live » and its well managed but timidly used clean voices, before a dismal onslaught of dissonant lead guitars that could also mark a potential future direction for the band’s sounds. Somewhere between melodies and visceral rage.

Although its short and condensed, the main message of “Athames” seems clear : witches, queers, weirdos, misgendered ones and other mysandras,are ready to resist and organize tehmselves. Even if it means bloodying our patriarchal society in a last sacrificial rite. Daggers injected eyes, and knife between the teeth.