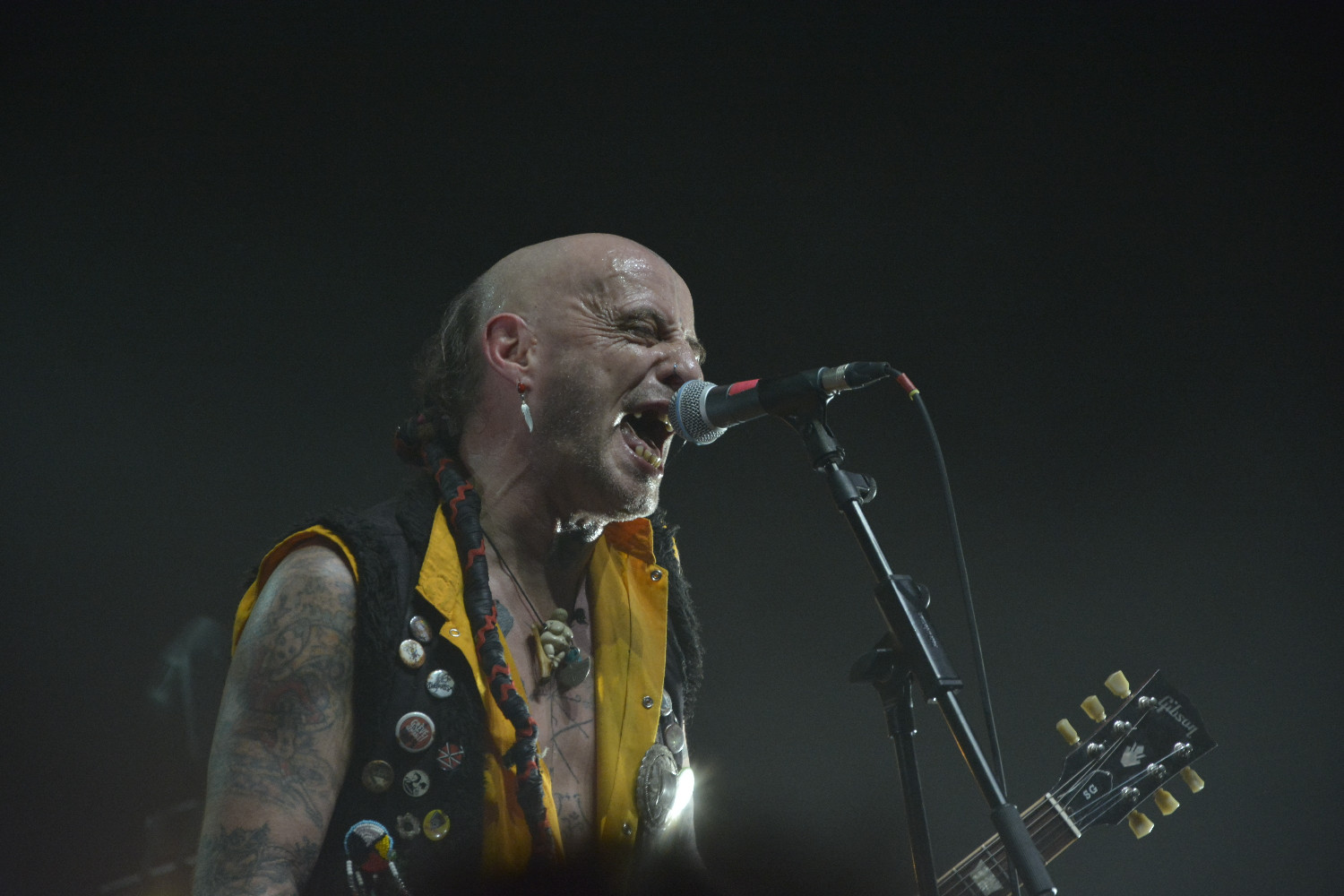 Last of the Mohicans, distortion guitar druid or eternal freedom minstrel, Loran is one of the most emblematic personalities of the alternative French scene.

Right now, a short condensed from a long interview with the animal, going back on his career,his musical approach, and also settling some accounts especially with 8°6 and hair conditioner !

Here’s the year 2022. Long time that the National Front collects more than 20% at the elections,that the french state of emergency is now normalized in the country, that every counter-culture is economically recovered, that the sanitary crisis blocked the alternative. How’s doing Loran within all of this ?

Loran : It may seem a little brutal,but the youth doesn’t “fuck the national front”. It’s like they’re lobotomized… It’s just an observation. I think that the actual revolutionary slogan is more « Get out of your home ! », we’re all responsible of the world we live in. I did my first gig in 1977,and never stopped then.

All I can say is that liberty spaces disappeared as pack ice.

I share the view of Antonin Artaud ( french poet/writer from the 1930’s. NDLR) about arts. He wrote a letter to the art academy rector to ask him how can he exercise such job…For me an armchair-artist will always make some shit. That’s why I’ve never lived from my music, I’m against the fact of showing yourself as profitable.

An artist is a marginal,someone who sees above the anthill.

Every situation is different,you need to take a step back. Music has no price,and about this, it’s our role to find the right price. I’m doing the old fart, but you have the « actual music » labeled music venues which are subsidized.This venues only books “profesional bands”, and us,are seen as professionalism troublemakers. But before all, it has to be passion…

What would you say to the people who wants to live from their music without being professionals ?

You have to build things collectively, go against the trend. With Bérurier Noir we rejected the bass/drum rock band cliché. It’s like James Dean who got noticed during an Hollywood audition doing the opposite of what he was supposed to do.

I also think that we have to reconsider the economical system of a gig, like with the bar or merch.Money’s just a tool,and collectively you use it safely. It’s like the Exarchia district in Athens…You centralize goods, and create encounters. Why all having a washing machine ? You establish one spot, and people go for it together! There’s a celt proverb telling : « never lock-up what’s alive ».That’s what we spend our lives doing.

It was also one of the main Geronimo’s struggle : fighting to not be packed into reserves. If you take a step back :all our life is functioning like this. Check what we eat.If you eat some locked-up animal, you’re locked up.

You lived in Italy for a couple years, can you talk about it ?

Just after the end of Berurier Noir, I felt like an emptiness. I had to do something.
I stopped music and went with hippies in the “wonder valley”near the Italian border.This is where two of my children were born.You have no car access, we were about 300 and we had an oath: nothing had to be motorized. When I lived there I didn’t want to be affiliated at Bérurier Noir. In 2003 I left to play some concerts again, and people from the valley were shocked because they didn’t know about my musician past ! At this time, I was filming alot and had my small production « Golden Cyclope »…

During the 90’s you made this very particular band: Tromatism. Can you explain what it was about ?

The goal with Tromatism was to form a band starting from nothing. How is it possible ?
First,we stole all our gear from music stores. Woosh ! a drum machine under the coat. And about our sound system and everything, we figured out that in every french community center, under the stage.

You had all the deficient declared gear, to keep on getting subsidies.

Woosh ! We siphoned the gasoil from corporate trucks during 5 years (1993-1998).It’s no stealing, just autoreduction ! We did the same into bio supermarkets.

We played exclusively in European squats and we proved that with nothing, you can form a band.

We’ve been kicked out of Hungary… We entered illegally in Bosnia during the war to play for the refugees…
We were entirely autonomous. We had solar panels above the van which powered-up batteries serving to light our shows.We also had a generator.
After the French nuclear tests in Mururoa, we boycotted every nuclear plugs,That’s why we always had our generator.
We weren’t drinking alcohol or eating meat and made alot of yoga.
We also made a small controversy with a song about vegetarianism : « Mange ta viande » which had earned us the label of “fundamentalists”. « If you want to eat meat, eat your own ! » (Laughs).

You always kept the same guitar playing style since the beginning, very rhythmic, tribal and recognizable at first sight…

Sincerely I think being the only guitarist who in 40 years of music never played a solo and stayed simple.I only play on stage and during rehearsals.I’m not that “jam session” guy. Yes, I’m a bad musician… But with the years, I developed a certain sensibility. For me the fretboard is just demonstrative.The right hand is more important because it’s the one who gives all the emotion. It’s like a person with a disability ,deprived of a faculty or a sense…you’ll develop new.That’s what I did with guitar. There’s a whole American-Indian concept about this that we could learn if us “civilized people” did not massacre them.

Did you ever played with drummers ?

Since Berurier Noir, I never played with a drummer ! In my first band, we were a drum/guitar duo. My second band just before Berurier (Guernica) it was the same…

How do you proceed for creating new music ?

There is no recipe. Everything can start from a text, a chord…For me, if you’re an artist and think you’re knowing it all, you’re dead.You have to question yourself anytime.
Since a couple years I noticed something in the rock scene, the TV entertainer syndrome ! (Laughs) Bands feels like obligated to make the audience sit down, split it in two, or screaming on demand ! This ain’t no rock concert. It becomes conformist whereas IAM used to sing « Rock is born into a cotton field »…
It’s like the fact that we were often compared to NTM…But we never signed to a major company, or anything with some commercial agent !

Since the beginning you’re talking about punk, where did you found it, what motivated you ? We feel you more into a hippy mentality !

It’s with the beatnik movement ! Punks are just angry hippies ! At the beginning it was a youth movement against capitalism.All the hippy thought, litterature, Patti Smith… The Doors…there was something strong about it ! Unconventional.

Now a rock band with a huge sound, huge distortion,huge spotlights, it’s a beautiful packaging… Beware of the people who smells hair-conditioner ! (Laughs).

When I see someone lying on the floor with his beer, he’s not a punk, he’s an enslaved. 8°6’s a poison that kills punks ! When I was a little kid, I was completely antisocial, scared of the world I’ve been placed into an alternative school…And I think punk is the logical afterpart of it. I’m only feeling comfortable when I’m onstage…

You have Greek origins, you never knew your family there ?

I’m Greek from my grandmother,I got a Greek name and also my children have it.
We did researches about our name but we only found us. My mother went to Greece to investigate… nothing.I got a particular relation with this country, I don’t want to play there if I’m not invited ! I don’t want to go as a voyeur tourist with my backpack without knowing the language and having zero contacts.

But then, how did you get closer to the Celtic culture,when you had no particular link with it?

Because of the wonder valley which was a sacred place for celts.There was the “Tribe stone” there that had been removed by Francois Mitterand.

During the solstice, celtic tribe chiefs went down to meditate in front of it… can you imagine the energy !

The Berurier Noir’s impact on the French scene gave birth to alot of bands, how do you perceive it ?

Like I’ve been influenced by bands… It’s a baton to pass. Ego is something very important when you make music, especially if you’re a Berurier Noir according to people who piss me off with it. That’s why having an international band like Tromatism was important for me, to disconnect me with my “Berurier” label. Because it was just a French reputation .In Poland, Germany…They didn’t gave a fuck. Those countries are discovering Berurier Noir now…

Yes, I also did theater.With the Chicken coop theater,we used to perform at free parties. 3 a.m you cut down the sound and you make theater… I can assure you that you’re obligated to be mind blowing ! We told a story that took place 3.2 million years before our era,the encounter between a primate and a warthog.It was about 30 intense minutes,with guitar, machines,actors,chinese shadows, and shocking images for people on LSD…

You told us that you used to plant a seed in every stage you played, how can you explain this ?

It was with Tromatism.We also baked some bread during the concert to share it after, because nothing’s more universal than bread.About the seed,we had a crowbar to dig the scene and plant the seed.The significance is that trees are our peers. And since we do not respect the environment it is normal that the environment rejects us…