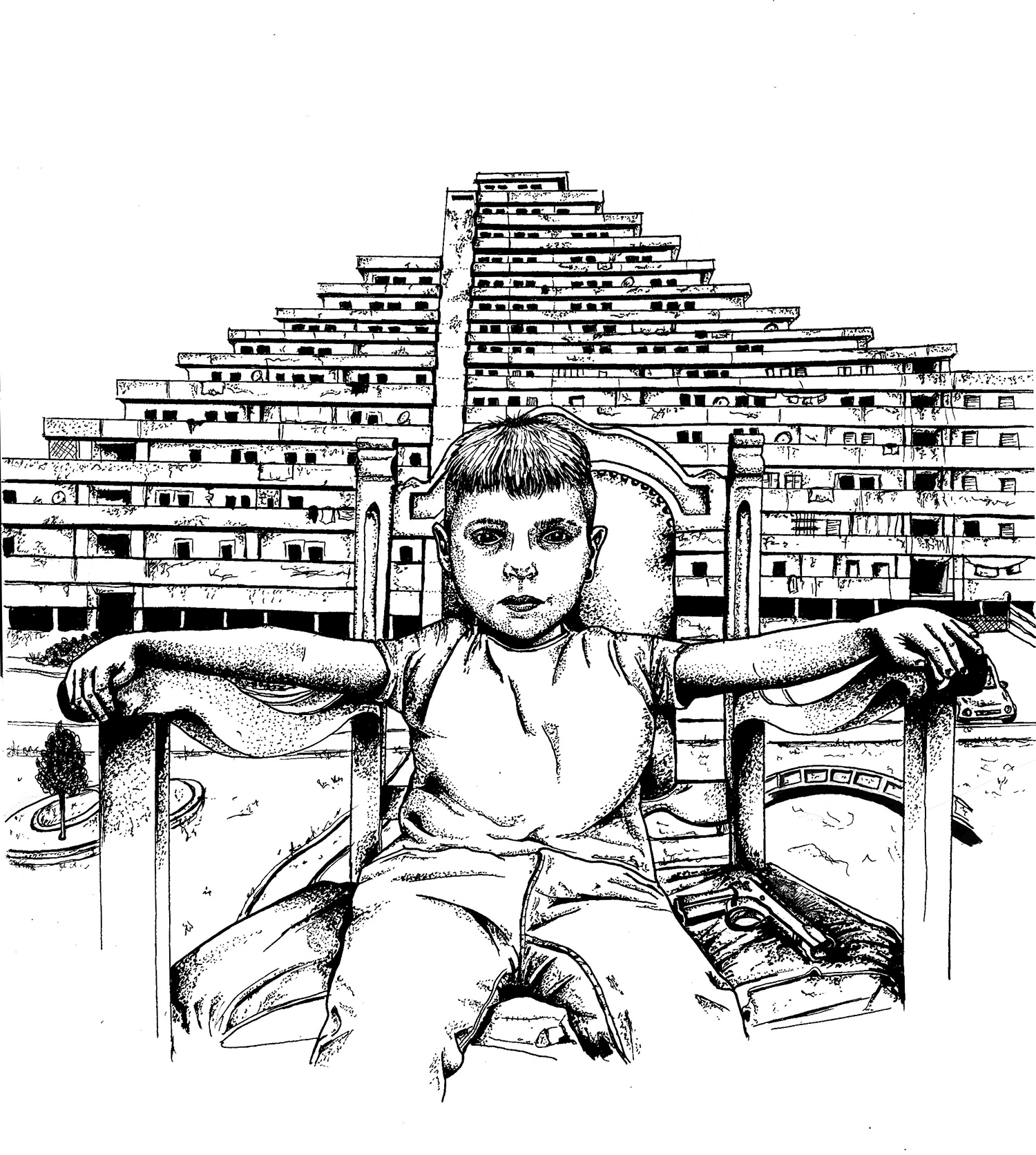 Ruling on an ocean of concrete, they ran, during 48 years, the direction of the vessel | By Momo Tus (Trad : Julie B.)

The Vele Di Scampia. Terminal of the underground. It is raining in Scampia. The drops tickle down the greyish cracked walls of the 35-storeys building and crash, slowly, on the concrete walkways. Squeal of scooter tyres on the concrete of the great aisles. Screams of the spotters on the roof across the street. Crumpling of banknotes. Sound of mixers running full speed. Children’s laughter. Laundry being wiggled on balconies. We follow a pathway, that leads us into the depths of the vessel. Shattered panes, broken doors, stacked bins. Syringes lay here and there, belonging to roaming lost souls, looking for the redemption shoot.

It is dark. It is hostile. It is the ordinary scenery for the Vele inhabitants. It is also the setting of the series Gomorra by Gennaro Savastano and Ciro, inspired by the Roberto Saviano book. This setting also nourishes one of the darkest urban imagery in the French rap scene, from SCH to Sadak, Sofiane or PNL : « J’suis plus Savastano que Ciro » (« I’m more of a Savastano than Ciro »).

But more than anything, it is the setting of a true Camorra clash of clans that turned this urban greyness blood-red in 2003. 16 years later ? They are still here, the mafia kingpins. Sometimes they are children, already without a childhood. Stern faces, stricken eyes. These are the faces of another Naples which failed, of a derelict peripheral area.

The Vele di Scampia. This is the story of an Italian  Noah’s ark of modern times, sailing on a sea of blood, of syringes and concrete.

There were 7 great sails, ready to welcome the bourgeoisie craving for greenery on the agricultural land North of Naples. Parks, stores, schools, it was architect Franz Di Salvo’s recipe.

But here is the thing : back in 1983, an earthquake causes more than 3 000 deaths, and leaves 280 000 refugees. The system stems. They need to park. To stack a population, no matter how reluctant and confused people are about it. Urban madness, mechanical aim for bigger. Noah’s ark, still in construction, will hold more than 65 000 castaways, in its concrete meanders. More than 23% of housing. It is the end of common spaces. Here comes the concrete.

The result of all this ? A giant hive. With no light. Contaminated with asbestos, as it has to be. Tunnels that cross, on and on, and unfold, on and on. A maze, with uncountable corners. Only those who know it can find their way. The perfect place for the Di Laura clan. Using misery to destroy everything, to lead « its » future : Only a few years passed, and the Veles have become the bastion of Neapolitan mafia.

Politics then state : « here’s a reality that leaves us no choice but to destroy everything ». Three Vele are destroyed between 1997 and 2013. In a cruel twist of irony, one of the Vele resisted so strongly that 284 dynamite charges couldn’t take it down, just like its inhabitant’s resilience. Three more followed in 2018.

Is it necessary to destroy so that we can rebuild ourselves humanely ?

We could think that, the Camorra being weaker, the Vele Di Scampia would get past the storm, step by step. But it’s the destinies of a whole generation that were marked forever by violence (Baby Gangs), dealing, and unemployment.

We could think that Gomorra’s success, allowing the creation of 4000 employments, had released hope for a better future. But in reality, it only reinforced the district’s bloody reputation. It only left young people trapped in the idealisation of a Gennaro-like destiny.

How is it possible to depict misery, and to let those who live it interpret it ?

They were called criminals. Slackers. They were trampled on. They were marginalised. But the inhabitants fought back, to show that behind the concrete walls, they had preserved a boiling resilience. Patience. Acceptance.

What future for the Vele Di Scampia castaways ? Matteo Salvini, the Italian Prime Minister, tried to make the destruction of the last tower a pretext to political recuperation. But this destruction is no entertainment. It’s the result of a 40 year-old fight, carried by a united community, that fought against those who fuel a war between the poor.

But how to build a new life somewhere else, when so many were broken ? An entire generation born and raised in violence. The dead have attracted the media. But what about all these young people that had all hope of a better life wrenched away ? What future for them ? What life project ? This, no one asks.