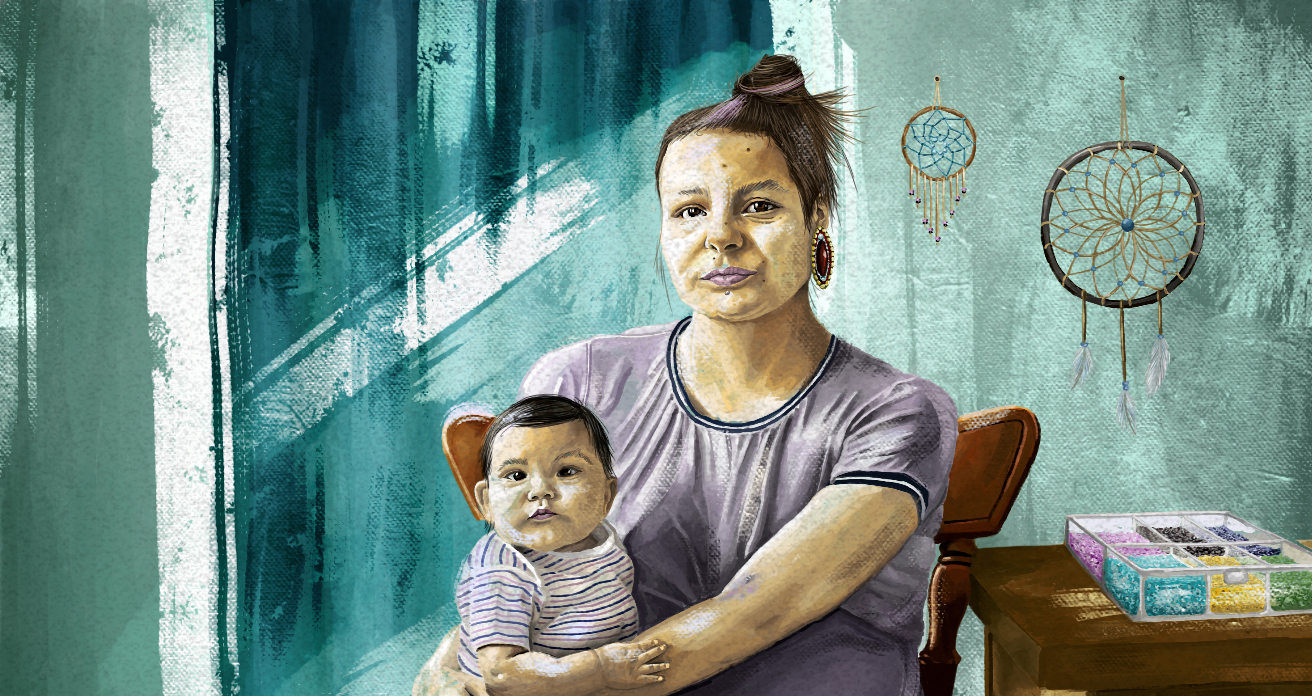 The Innus of Sept-Îles: on the wrench over two worlds.

It is one of those territories where darkness envelops us entirely in the pitch black night. Far away, elders singing in Innu-aimun near the fishing hut where, through generations, dead souls and children’s games have crossed paths.

Facing the waves skimming the shore, with our cold face, two halos of light illuminate our seal skin kamiks buried in the sand.

Uapikun (“Flower”) and Shipiss (“Little river”) walk towards us, bundled up in their coats matching their strands of hair. Uapikun is dressed in pink. Shipiss, in blue. Armed with a headlamp and buckets, they watch for the frantic movement of the frail fish washed up by the black waves. | Article and illustrations by Momo Tus

Inspired by the novel “Kuessipan” by N. Fontaine & the film of by M. Verreault

Free in the sole constraint of surviving.

In my mother tongue, the word freedom does not exist. You may have to know captivity to imagine what freedom is. I am trying to find a word that could fit. Maybe Nutshimit.

Here we are, following this night of fishing, on Road 138 running along the St. Lawrence River. On our way to the Uashat “reserve” in the bay of Sept-Îles, performs a balance act to catch salmon. We smile thinking about this sentence: “The Innu are people of the river”.

The imagination of Nutshimit – inland – takes us to the outer limits of landscapes that are both sublime and terrifying, marked by isolation and cold. Vast lands shifting from a flamboyant red to a calm white according to the seasons. Ceremonies, throat singing, oral histories, all these rites bring, through this link with the earth, serenity facing the turmoil of the modern world. This is what the Innu call “silatuniq”: respect for the elements and the spirits that surround us, but also and above all, for the relationships that bind them.

Here we are, in the “reserve”. A feeling of space closed in on itself. The wooden houses follow one another.

This is where Shipiss, her parents, her four siblings and her grandmother live. It’s small, we jostle one another, but it’s warm and cosy. In the living room, a multitude of dreamcatchers watch over a dozen open boxes, filled with pearls and charms of all colors. A long green tarp is deployed on the ground on which a caribou rests. The father, Tshiuetin (“North Wind”), cuts up the beast.

Like him, Mashkuss (“Teddy bear“), the brother, learned with his elders to hunt caribou but also the seal. Proudly wearing the jersey of his hockey team, he joins us on the bench by the river. Under the radiant sun, only the roar of snowmobiles can be heard.

For Mashkuss, “Attachment to the land is what still binds us to the past and to our elders. Hunting, gathering or fishing give us a feeling of sharing, belonging and freedom. It’s a place to escape and to heal.”

Mobility within the territory is not regulated: they feel free there.

His gaze falls on the smoke billowing from a large white teepee in the garden. It is here that, from time to time, his grandmother, Nuna (“Country”), born in a camp, settles down to reconnect with the “real” innu life.

Nutshimit is not a place. It is vastness. The reserve is a place. I hate that word. I believe that it is possible, without realizing it, that the place we live rubs off on us. To believe those people who tell us who we are, to restrict ourselves to an unambitious daily life and to accept obediently that we were born without stature.

In Nuna’s tent, everything is incredibly serene white, from her long white hair to the muddy grass. On the floor, near the wood-burning stove, she smokes the grass that rolls and not that chokes, which clouds the air and the mind.

For many elders, the new generation is not “real” due to the linguistic and cultural divide. It must be said that the elders carry within them a suffering of a whole people that no word can heal.

Between two long puffs of smoke, Nuna explains that the government’s forced ostracization of the Innu has resulted in a loss of rights over their territory and the end of nomadism.

“The sled dogs have been culled, reducing our ability to move around”. While entire families were parked in these “reserves”, some children were placed in Catholic boarding schools “civilizing natives”. Hundreds of children will be withdrawn and placed in Catholic residential schools to “civilize the aboriginal”. A dispossession of the earth, but also of the spirit. The confidence of an entire people in their societal skills, in their knowledge and culture.

“Rape and torture to kill the Indian in the child, and make him white.” In fact, they killed the child.

Young girls with round bellies, boys gone too early.

I created a fake world. A rebuilt reserve where children play outside, where mothers have children to love them, where the language survives. But who wants to read words like drugs, incest, alcohol, loneliness, suicide, bad check, rape?

Young people seem to bear the brunt of it, like a curse that passes down generations. How to realize yourself in these reserves annihilating your existence, by reminding you daily of these traumas?

We came back home, in the warm. Languages ​​are jostling one another. With schooling and Westernization, young people tend to save Inuktitut for elders and French for the rest.

Yet they remain on the sidelines. Isolation and its consequences in terms of access to services, work, school and even basic necessities affect their daily lives. Girls with round bellies, boys who left too early, husbands who stagger, women with hidden bruises, lives stolen. The list is long.

Far away, cries of alarm. Wolves approaching the territory. Uapikun, outside with her baby, takes refuge with us.

Dressed in black pants and a purple sweatshirt, labret piercing, earphones around her neck playing Beyoncé’s distant voice, she always hangs out outside, seeking the serenity that the shelter cannot bring her.

Uapikun thinks there is no possible future here. “The elders criticize us, prevent us from moving forward and are stuck in the past. We young people are no longer hunters. Hunting is for recharging one’s batteries, but not for subsisting. We can’t be just Innu anymore.”

For many, allochtone assimilation will have devalued innue culture with a whole generation.

If they do not feel innu, nor Qallunaat (non-native), who are they? Staying cut from the world but protecting his inheritance, or go to take the high speed train of the present time? Innu young people are trying to find themselves and tangling between past and present. They reel, there, on the tear of the world.

From the ice floe to the freezer.

A present world dictated by a clashing western culture. At school, western learning depends on reading and writing skills. However, in Innu culture, it is oral tradition that accompanies the child, through initiation rites, into adulthood.
The school calendar is the opposite of traditional activities, as is the unique use of French whereas Innu build their perception of the world through their language and each word has a symbolism.

We think about all that, gathered on this festive evening with the whole family in the little house. Colored little lights illuminate the entrance. We eat, we dance, we sing. We say to ourselves that the picture is not so black.

Together, elders, young and younger people. Tonight, we are singing in Inuktitut with caribou skin drums in the background. But we drink beer from red plastic glasses. We eat sushi with salmon caught the day before. But we also taste the cakes bought at the local supermarket.

If we look at what the Innu have accomplished over the past two generations, it is clear that this millennial people had already developed, because of their ability to adapt themselves to things of Earth, practices and values ​​capable of adjusting themselves to the challenges of the new world. Capable of moving from confinement to greatness. Able to go from the fridge full of beers to the cold rivers.

Innu managed to seize this “reserve” to make this prison a home, united against oppression. In fact, we never really liked that word, “reserve”. It takes on all the symbolic violence of segregation. There is no freedom in that.

But, what about outside?

Pride is not a repressed emotion, nor feathers worn in my hair, nor beads sewn on my jacket. Pride is something that is built. To stand up straight, you must first believe that you are legitimate.

In town, it is difficult for the Innu to find their place.
Or rather, we do not give them. Exile in an urban environment, to study or dream of another life can turn out to be a real shock in the face of the capitalist economy, racism and prejudices.

When it gets cold, only them are left in the streets of the big cities. Them, they are the Innu who made the choice to leave, but who fell into wandering.

Shipiss’s older sister has disappeared. Like many Innu women in town, in complete silence. However, while isolation generates misunderstandings between Innu and non-Native, some young people manage to overcome invisible barriers by settling in the city and convey a new perception of the world by resisting marginalization.

By creating innu institutions, music groups, artist collectives, companies outside the reserve, these young people give visibility to the people, to their culture, while creating safe public spaces.
Spaces where Innu speech is valued as civic speech and where traditions are preserved.

contrary to the oral tradition – but also a better awareness of the school to the indigenous reality (innu history, innu language option …) and a development of interactions between Aboriginal and non-native.

Yet, it is crucial that the intake of Innu in the city should not only be considered culturally but economically. The Innu are now also entrepreneurs, business people who contribute to the development of the city.

By succeeding to carry as a pride the richness of their legacy, these young people show that the Innu values can be both preserved and understood within the modern world. Tradition is no longer seen as an eternal repetition of the identical, but open, fluid, as a continuity in the change induced by the world in which we must coexist.