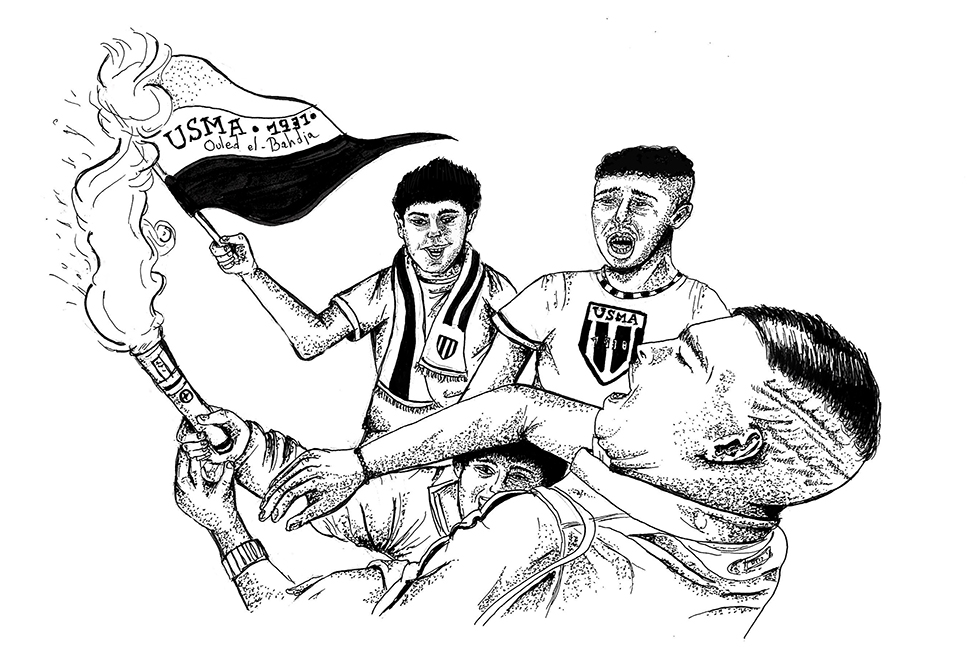 The forsaken of Bab El Oued

Bab El Oued. The 3 loudspeakers, stowed to the mosque’s minaret, make a crackling noise from the sound of the Imam’s voice. For an instant, a worry- less, compact crowd fills the streets and pavements. Dominating the crowd, the thousands of bright withe coloured gamis contrast with the scaled whiteness of the colonial architecture of the surrounding buildings, ravaged by humidity.

The wobbly balcony ledges once used to proudly show off their multicoloured parades of linen, drying in the sun. In the streets used to linger thousands of spices’ scents, swept away by a soft breeze from the sea. Bab El Oued used to be one of Alger’s gates – it litteraly means « the stream’s gate ». Oh how beautiful she was, Bab El Oued. We used to call her the beautiful European. As Alger’s fist popular district, Bab El Oued took its essence in the gentle summer nights, the long walks among palm trees, hand on heart, heart on hand.

The Algerian spark, and its legendary fits of anger.

In its incandescence, it also used to host a great resistance. It was the country’s social thermometer. Bab El Oued saw lives taken away before its eyes. In 1962, Bab El Oued finds itself caught between the OAS (Secret Army Organisation) and the French military. A four-days blockade then ended with a mass shooting on Isly Street, leading to 46 deaths.

In 1988, during the democratic intifada, it is where things really started to shift. « Bab El Oued Chouhada ». From a one-track thinking to a pluralistic system. As the youth of Bab El Oued storms out in the streets and ignites the whole Algeria, shots are fired. The outcome : around ten deaths. The blinded government, by shooting on its people, had just handed the streets to the islamists for the 10 years to come : the black decade.

More than 10 years passed, scarred by social misery and religious fundamentalism. But these years also made it a bastion of social contestation. As a testimony of this stand 2011 riots, during which the people of Bab El Oued rose several times against the soaring of prices and the lack of social housing.

We don’t live, we survive, in emptiness.

Nevertheless, these fits of rage weren’t enough. And there stands Bab El Oued, alone, watching the Arab Springs bloom around it, without it being allowed the same changes. After the floods that severely damaged its streets in 2001, the 2003 eathquake, and the several earth tremors and heavy rains happening every winter, the people of Bab El Oued remains isolated, in substandard housing, ready to crumble.

Today, more than 200 000 people inhabit this overcrowded district. A 30m2 apartment is averagely inhabited by 6 people – at the minimum. The yesteryear beauty no longer exists and it has become a skeleton, lifeless.

Many say that Bab El Oued officially fizzled out on the day of Algeria’s independence, and its bloody ending. That day when, on « Reason of State », thousands of uprooted people found themselves standing on the Marseilles docks in the summer of 1962, wearing their winter clothes. In Bab El Oued, there isn’t a street or a square that doesn’t wear the name of a martyr, of a general, or the date of a victory. It is omnipresent in History, and in every mind.

This legacy is a heavy burden on the shoulders of the youth from Bab El Oued, a youth long put aside, representing 70% of the population. If you ever go to Bab El Oued, you will see the bell tower. And around it, all those you will not see. Probably all young males, sitting. Idle. What is there left for them? Benches. A decrepit city. Unemployment, and daily life radicalisation. And the drugs. Every day is just another empty day, with nothing to do. Here, we call this « Hitism », that action of staying idle, leaning against a wall.

Prisoners of a past they bear, and a of future they think won’t exist, the youngsters are facing boredom, forfeiture, slump. Emptiness. They face the lack of money, and the slow disappearance of romance, which faded from a conservative way of life. Like foreigners in their own country, they wonder : « Why us ? Why bother working ? Why bother, when I couldn’t even afford to pay a rent ? Why having a girlfriend ? When I don’t even have enough money to get married ? ». The average pay rate here is 30 000 dinars, 150 euros. And the dowry is about 70 000 dinars. Life here means hoping for nothing. So they try to cope. They make the walls speak for them, they graff words, sentences, to satisfy their rage.

A suffocating people. Alone, always. Left behind by an insensitive government, though they do have funds.

We are not alone.

But whatever we say about it, the spark has always been there. Even though they are victims of History, the inhabitants have held on. The district’s mediterranean wealth, made of friendships and solidarities, always managed to keep its youth in a ball of resilience. It helps escaping the immenseness of boredom, it helps living, moving, talking, screaming, crying, laughing, smiling, dancing.

The energy once lost seems to have been found again in the stadium once a week, when it comes to supporting the USMA, Bab El Oued’s historical football club. The young supporters wear its colours – flags, scarves -, on balconies, windows, and of course on their outfits. Car rodeos, screams, honks and loud music. People shake hands without ever forgetting to mention which club they support. Chants and tifos are made up in great secrecy.

Football became more than just entertainment, it became a way for young people to feel themselves alive, existing. And this is not just anecdotic, since the Ultra supporters have been playing a huge part since February in Bouteflika’s abdication.

And then there’s Nasser and Djamila Meghine, children of the district. Many years ago, they felt the need to offer those young people new life perspectives, hopes for a new daily routine. They wanted to give them hope for a different life. With the help of some of the district’s inhabitants, they founded « SOS Bab El Oued », as a resistance to social difficulties.

The multicoloured hall of the association offers a jamming room, a darkroom for photography, a library, and many computers. These kinds of structures are rare, even in the Algerian capital. So people gather there, to forget the « struggle ». To escape the walls against which they lean to hold their sorrow and resignation.

Many find a new spark, a revolutionary soul, in music. Instead of hanging out in the streets, they learn to handle a pen, or to play the guitar, until late at night. Influenced by the sounds of IAM or NTM, thanks to the cassettes sent by their cousins from France, they were able to express their anger as well. Nasser therefore played cameraman, and helped the forming and production of bands. Le rock band Afockaïn was born between these four walls, under the considerate look of a Che Guevara portrait.

But it would be too beautiful, if it all was that easy. Playing rock, rap, metal. Dying one’s hair red. Wearing dreadlocks. These practices are still considered deviant and transgressive in the Algerian conservative society. Accused of satanism, censored, these alternative artists decided not to stay down, and still get organised through independent collectives and social networks.

Lively Algeria, a scream aimed at the future.

Will Bab El Oued ever get its chance to change ? Even though Bouteflika’s demission put an end to an era of corruption and authoritarianism, the December 12th ballot is being prepared in a climate of absolute political crisis. « Thieves », « Corrupted », the Algerian people goes out in the streets every Friday to speak out agains the actual government. The parade called « Bab El Oued Casbah » often denotes by its festive and popular way of demonstrating its opposition, being animated by the young USMA supporters.

So no, despite what people said, Algeria is not just awakening from its long silence. From 1962, to 1988, to 2001, to now, the fight never stopped, developing step by step, to hatch today with the strength it needed. The only silence worth criticising is the one of the leaders, who for all these years, decided to ignore a forsaken population’s scream.