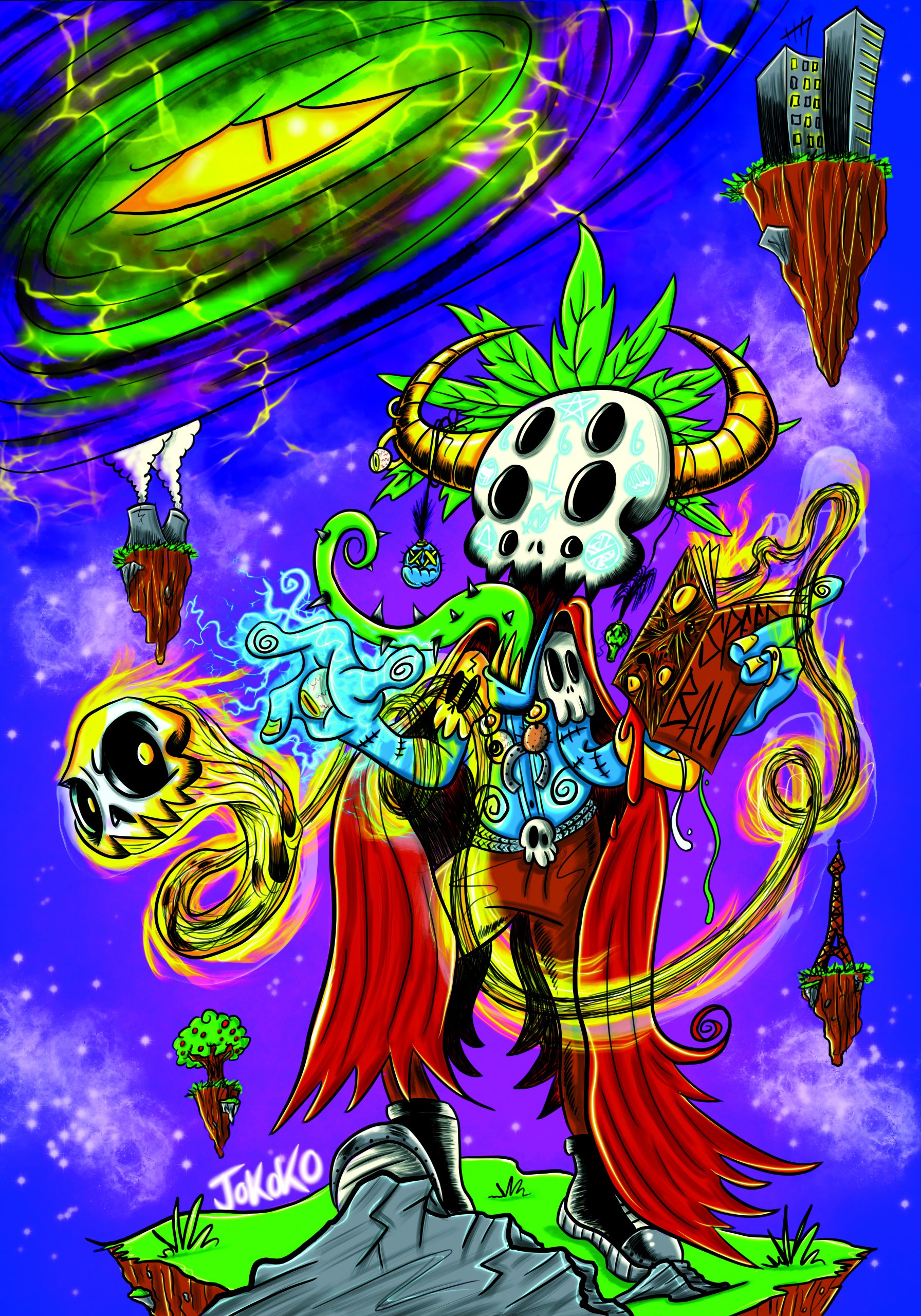 A few of you might already know Jokoko for his live drawing performances with Guerilla Poubelle. As a real skate-punk addict since he was a kid, the Montreuil-based illustrator has been rocked by NOFX and Pennywise’s music. This influence can be felt throughout all of his work, from gig posters, album covers to drawings for his fanzine, Kronik. Let’s play a little bit of Punk in Drublic to get in the mood for this interview!| By Polka B

How did you start drawing ?

I’ve always been drawing. In the 2000s, I had to draw in order to make concert flyers. Initially for the band Les Betteraves, and more generally for the Parisian punk scene. One thing led to another, and I began doing that a lot. Apart from that, I am also into illustrations and comics. It made me want to make fanzines, posters, album covers… for punk and ska-punk, mainly.

How did you pass from being a spectator to being an actor of this scene?

The concerts, as usual. This comes naturally through making contacts. I directly offered my services, for free. At the end of Les Betteraves, I was integrated into the group. I was doing stage paintings, artwork and some illustrations for their website. Around 2003, I enriched my experience with Guerilla Poubelle. I following them around until 2008. We made together a lot of concerts… I was jumping from one concert to another, it was cool! I participated in the first two albums for the backs and some vocals. And of course I was going on stage with my paperboard.

Did you feel like a musician in the band?

I did it without asking any questions. It was quite magical because people appreciated what we were doing together. We shared a lot of great moments. On stage, I love it when all the senses are stimulated. The visual is important. It’s a bit like organizing an exhibition. The music must be present. More artistic proposals at the same time you have, better it is!

On stage, did you change the way you draw?

Clearly, I feel it through my line. It’s energy! Sketches, hastily drawn. A very ‘punk’ thing. I was according my drawings with the music by tearing the leaves little by little. Something like fifteen drawings for a set I think. At the end, we were giving them to the public so they would remember.

How would you define your style?

I was inspired by images that marked me, like the NOFX covers. It’s important to find your hand. It comes with time. I am a little jack of all trades. Beyond the style, I practice several techniques. Watercolor, painting, drawing with felt, stencils … I can go in many kinds of directions.

Who are the authors who inspired you?

Illustrators like Larcenet. In general, I like childish and naive traits. Fluide Glacial, obviously. A little trashy black humor. I like a lot comics without conversation bubbles. I read a lot of things. Recently I exhibited Dav Guedin, a great illustrator. I advise you to read Breizhskin!

What are your current projects?

I’m a freelance graphic designer and I work at “Fatalitas! Tatoo” in Montreuil. I am responsible of the reception and I take care of the appointments and a bookstore associated to the tattoo parlor. It gives me the opportunity to organize exhibitions and book signings. And I draw of course! I’m involved in an alternative comic book association called Kronik. At every new release, we organize a party in Paris. I really like the storyline side of comics. I always wanted to do that.

In your opinion, is the French punk rock scene still active?

Of course, it endures, forever and ever. It is even renewed. The most important thing is to create something with other people. With Guerilla Poubelle, we’ve always been saying: anyone can make a group. We just meet and we play. It’s exactly like creating an association. It’s the DIY.

Which groups are you listening to right now?