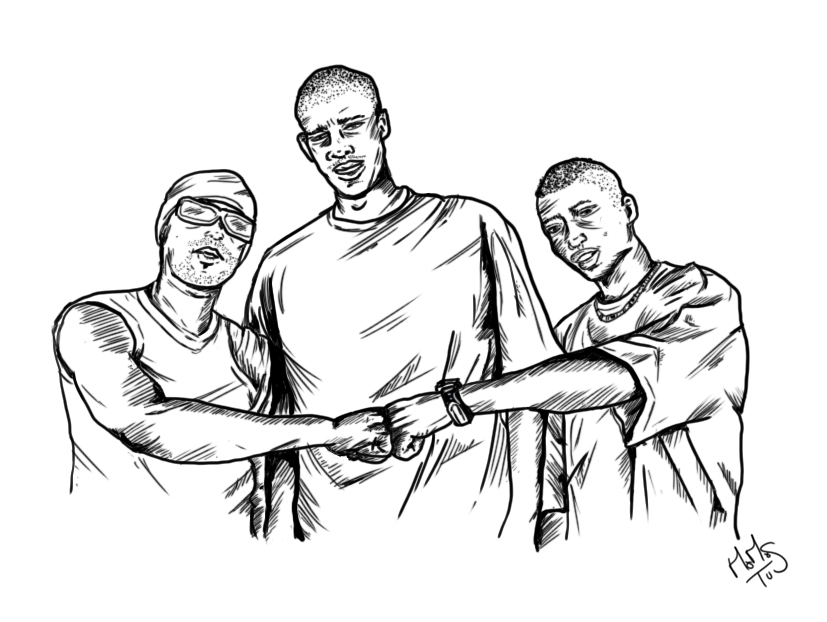 Mauritania, from the ban on singing to unified rap.

It is often said that rap can take on a political and social role. But can it be so far as to reconfigure generational relationships in a society strongly marked by questions of ethnicity? | Artworks and article by Momo Tus

Here we are, at the top of the dune. On the mountains of endless reddish sand, the wind erases the few footprints of wandering goats and water carriers. Slowly, the hand raised to the front, we can distinguish in the distance the bivouacs of urban shepherds and the colorful melhfas at the gates of the desert.

A mirage comes true, the sand is exchanged for a scorching hot concrete. There you are, Nouakchott. The few buildings of the port city, capital of the Islamic Republic, stand in front of us. To the sound of the songs of the Muezzins coming from all over, among the Mauritanians dressed in their boubous fluttering in the wind and their well-adjusted sheikhs, we go from Arab to French, from French to Hassanya, from Hassanya to Pulaar.

The bloody memory left by Al-Qaeda in 2007 opened 10 years of border closures. A shame for this country, however by nature a land of passages, a desert link between North Africa and sub-Saharan Africa. Petrified by history and nomads, from the Arab invasion to the arrival of Europeans, we feel that like grains of sand, this country covers multiple mixed identities.

Mixed-races, but not equal. We just moved away from the opulent avenues of the city to reach the district of Basra. On either side of the dusty ground, there are cracks in makeshift little white houses and dozens of satellite antennas. Oriented towards the world, like the port pier.

A little further down the street, are grouped Ibrahim, Kane and Karim. On the floor, a small burning brazier on which is placed a teapot, a wooden stool and wheels acting as a seat. As Karim slowly pours the tea into small glasses, Ibrahim and Karim drop verses, headphones in their ears. “Don’t accept being cheated, it’s time to wake up!”

All three are dark skinned. In Mauritanian society, built on the ruins of slavery, color determines a whole life. The white Moors, Beïdhanes, resulting from large Arab-Berber families of warriors or marabouts, occupy the positions of power. The Negro-Mauritanians and the Haratines (black Moors) are the former slaves of the Beïdhanes. “Like us,” Kane says, pointing his index finger at his skin.

Former slavery? Kane stops us and points to some kids selling water on donkey carts. Not quite former, no. Not only is slavery still perpetuated, but it is practiced within the Negro-Mauritanian community, excluding land sharing or inter-ethnic marriages.

The language of the dominant

Eyes return to the whistling teapot as Ibrahim attacks a new verse, switching from French to Pulaar, Pulaar to Wolof.

The oldest grimoires tell that this port city would take its name from a weeping well. Tears told by “the country of a million poets”, crossed by multiple dialects. The Moors, white or black, speak Hassanya. Negro-Mauritanians speak Wolof, Pulaar and Soninké. And French of course. So much so that each district has its idiom and that misunderstandings are frequent.

Yet, around us, the majority of storefronts are in Arabic. Ibrahim stops. Because it is the official language, that of the dominant, Les Maures blancs. In a logic of acculturation, the White Moors did everything to Arabize the various public spaces.

“I learned French thanks to MC Solaar” continues Karim. We sketch a smile. The one and only Claude. “When a word was unknown to me, I would look in the dictionary to understand its texts. It earned me to be the first of the class in French ”.

However, Mauritanian rap stands out as a veritable linguistic ballet between all languages. The plurilingual dimension of Mauritanian rap has a crucial stake: that of transcending ethnic cleavages. Unlike European or American rap, it is not just the message but the language that itself becomes a political tool. “This is our strength, we try to represent everyone”.

Hide this song that I couldn’t hear

Language, a political tool, but also… the right to sing. Contrary to local customs, these young Negro-Mauritanians do not sing: they “allow themselves” to sing. Traditionally, it is the griots, white Moorish poet-musicians, who hold this right. And this is not insignificant: mainly telling stories of aristocratic warriors, these songs were intended to perpetuate social relationships.

However, Kane, Ibrahim or Karim, just like the first Mauritanian rappers, made the choice to sing about their living conditions. From a dominant song, we move on to a song that transcends all castes. Rap is completely extricated from relationships of heritage and domination. Ethnicity is never declared in rap: it is not about dividing or provoking, but rather unifying and reuniting.

This is the uniqueness of Mauritanian rap. Rap is often characterized as a political weapon. In reality, conscious European rap which claims to be “political” is far behind. More than sharp words, this one has real impact. It takes on a unifying role for youth, transcending ethnic particularisms and class relations. Rappers almost take on the role of educator, and in that sense, they have to be flawless. “This is called – us versus us –,” says Karim.

That’s why today, rappers have become main targets of the ruling power. Monitored, tracked down, records confiscated. The Ewlaad Leblaad were the first to put their feet in the pan with their song “Coup d’Etat (Putsch)”, in reference to the military putsch of August 6, 2008. Forced into exile after being in prison alongside terrorists, they are now actively sought by the police.

“We grew up with them, they inspired us to get out of our precarious and routine daily life, but also to create and know how to express ourselves.” Karim hands us the headphones and plays the song “Voleur (Thief)” from the band against the Mauritanian President. “You sold everything, looted everything, wasted everything. Catch that thief. ”

The tea break is over. Karim, Kane and Ibrahim take us through the mazes of the popular district of Medina 3. Sneakers, Yankees cap, “Boston University” sweatshirt. Here, the American replicas multiply. Faced with the sobriety of the Moorish boubou (the draa), the young people decide and express their belonging to their culture, not ethnic, but musical.

It was at the Olympic Stadium in the capital that this culture began to be born. In 1990, we found the Men Posy, Erneste Thié, and African prodigy. Inspired by US rap culture, we wear baggys and compete in Beatbox battles. A rap above all of sonorities, which will give way to a new rap carrying messages in 2000.

We then go from the Sharp radio station to recording in the studio, even if the logistics remain limited and the biggest will go to record in Senegal or Morocco. But, the resourcefulness is organized. Local initiatives are emerging such as the Assalamalekoum festival in 2007, the first festival which will make Nouakchott the capital of African Rap in 2019. Carried by rapper Monza, the festival is part of “resistance through music” to keep “far away” political recovery ”and“ to block all forms of rascima and discrimination ”.

“The truth is, we are not free at all. Our only freedom is rap. “

Diversity “keeps its chin up” despite these borders, through the mixing of ethnic groups in public spaces driven by youth. Allowing the discovery of the other, rap pushes the development of a fertile ground for awareness.

A certain Mauritanian youth, independent and full of ideas, dares to speak out and break out of the pessimistic straitjacket of their elders. To make things better, without expecting anything from the system.

However, there are many obstacles between unemployment, illiteracy and an average salary of 200 euros per month. Studies make people dream, but remain inaccessible. No café-concerts like in Dakar. No big, busy places like in Cairo. “We are terribly bored there“. Many are there, seated at the iconic Café Tunisie, sipping their latte, smoking cigarettes and watching the cars go by with 2-3 nudges on their Facebook feed.

Speaking of Facebook, a party organized this Saturday evening drew crowds on the social network. 9:50 p.m., a few minutes before the start of the festivities – however prohibited.

Curious about it, we caught up with a friend who is planning to go. As she prepares, we are thinking about our 3 aspiring rappers. What about women in all of this? Aicha explains that there have been girls since the 2000s. Sister Kelly, Sister Keuz or the Daughters of the Bled. “You know, here, when you say ‘rapper’, people think: failed girl, who does drugs, who is not presentable, who sleeps with anyone.” Unfortunately, after some researches, we realize that all of them have had fleeting success, caught up with by society.

Aïcha finished putting on a light pink tank top and white skinny jeans under her melafah. We follow her, slipping through the starry night to find her friends without her parents knowing. The hot wind is still blowing. In the distance you can still hear the traders of the port negotiating noisily the price of the kilogram of sea bream, while the fishermen hoist their canoes on the shore.

Fortunately, Aïcha is a Beïdhane, a white Moor. Negro-Mauritanians are closely watched by the police and are likely to be picked up at a bend in a street at night. Three knocks on the door of an apartment rented occasionally by a few young people: it is opened, she drops the veil, and the party begins to the sound of a small sound system which plays rap hits from all over the world.

The crowd throngs, these clandestine parties are rare in the capital. Rare, but more and more frequent. Like the tags that are beginning to dress the walls. Like the painting and sculpture exhibitions that flourish. Like a youth who are increasingly protesting, determined, who we hope will also have the right to their Spring.

Everything can change very quickly …