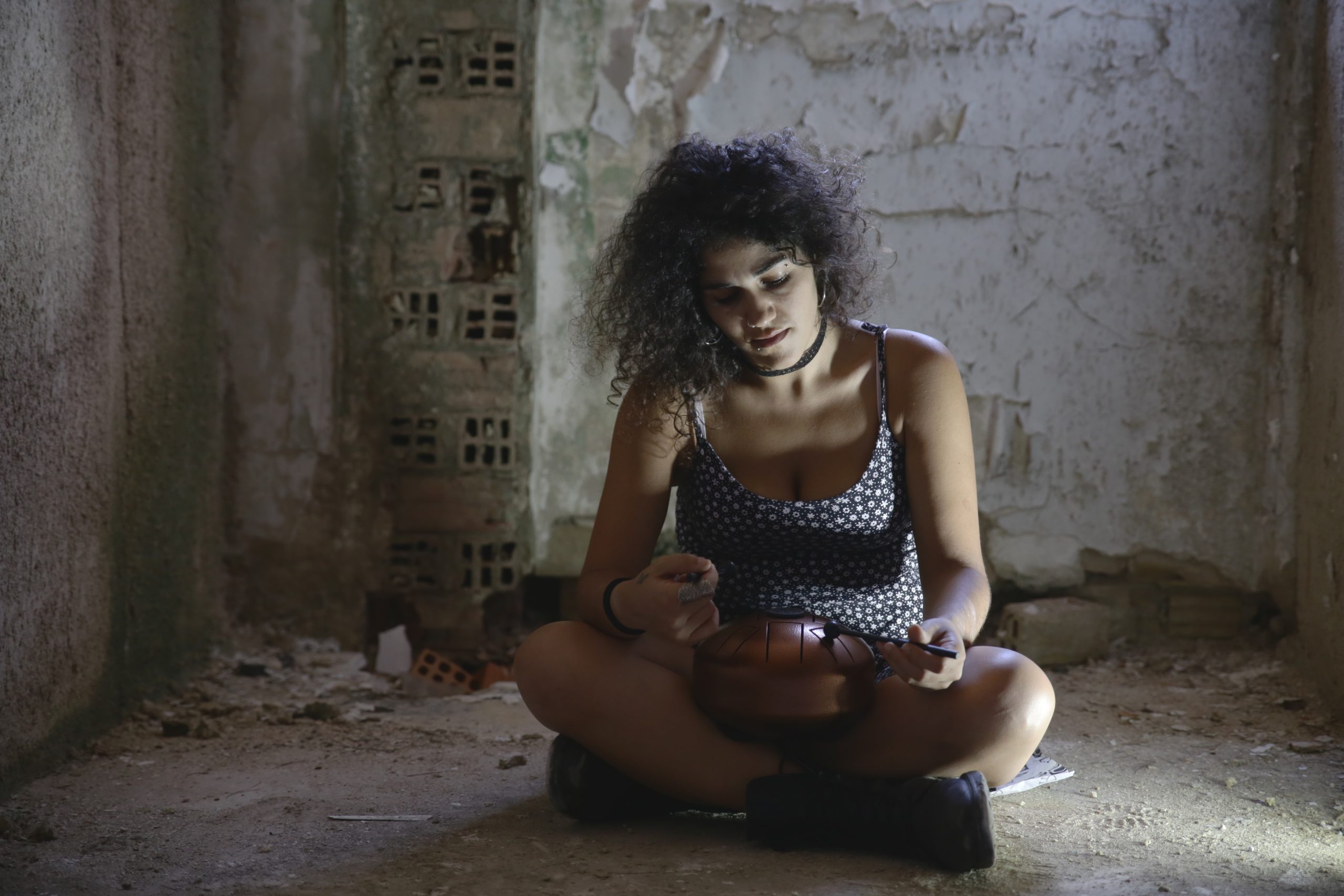 The Athenian rapper chose to keep her real name, for the authenticity of her music is never to be doubted. At Sara’s, there is no room for fiction. Her tracks reflect her. Her texts reflect her life. Her chaotic and troublesome path has shaped the style of her rap : rebellious, raging and uncompromising. Her incisive words tackle the injustices she’s been through ever since her childhood. With such an intimate approach, it is hard to ignore this character’s life. | By Polka B. & Dimitra

« I grew up in a typical muslim-Egyptian family, my mother was a christian and it was a problem. Ma father made me pray, fast and live according to the words of the Prophet. Allah said that all women must wear the Hijab, that they must not speak to men or have any kind of relationship with them. What ? It’s a shame to pretend that all women must obey their fathers, brothers, husbands and live as slaves serving the men of the family (…) Wake up, because one day you’ll have to wake up and assume the consequence of a society that was built on the words of men and a sanguinary religion, a religion that exists to serve the authority. But this day will come when the women will revolt ».

Sara ATH – Stand as a woman

Rapped in Arabic, here’s the first verse of « Stand as a woman » (« Στέκω Γυναίκα »), one of the top titles of the album. In the music video, we can see Sara pouring the tea to her father while reciting this text. She stands against him and ends up drinking his tea, looking him right in the eyes. Through this autobiographic scenario, Sara takes off her Hijab, and meets a friend on the beach (played by the Greek rapper Iro-íni), whom is persecuted by men as well. Together they leave driving a truck, symbolising they quest for freedom and emancipation.

This track, representative of the album, talks about all the reasons that brought her to rap, just like she told us a few month ago : « I wanted to talk about what bothered me, just like millions of women and people from the LGTBQUI+ community in the world. I wanted to express this through my music, because I’d never heard this kind of text in Greek rap ».

But let’s go back a little.

When Sara comes back to Athens after a dreadful year spent in Cairo with her father, she is only 16. She manages to find a squat to live in the center of the city. She lives day-to-day, and grows up building herself in a concrete jungle.

Athens is her « school ». The drunk nights in the city center, the motorcycle joyrides, her discovery of punk, through the rhythms of Xasma, Kill The Cat, Lost Bodies, Wxra Speiroxaith… The street concerts. The vibrating crowds. Her first steps in the Do It Yourself scene. She is reborn : Sara learns how to be free through the omnipresent music.

But the picture is far from being perfect. The men’s oppression follows her like a shadow. It might be less present on a daily basis, it’s still pernicious. Sometimes dangerous. Fear takes on her when she walks home alone at night. Her rage is still strong. Naturally, she frequents anarchist, antifascit, libertarian and anti-authoritarian milieux. She listens less and less to punk. More and more to rap.

On December 6th, 2008, Alexis Grigoropoulos (15 years old), is murdered by the Greek police. Athens bursts into flames. When she participates to two riots, Sara realises the extent of the collective rage, shared by the young people of her generation.

On Septembre 18th, 2013, the rapper Pavlos Fyssas a.k.a (Killah-p) is murdered in the street by militants of the neo-nazi party the Golden Dawn. Sara has grown up.

He political conscience has been sharpened. This time, she find herself in the front line on the scene of the crime, to charge the police, along with thousands of protesters.

On the Greek anarchist rap scene, linked to the Do It Yourself movement, there is a before and an after September 18th 2013. Sara feels that way too, and as she starts writing, she feels the need to represent women, that are very rarely represented on that scene.

How is it possible that patriarchy, sexism and misogyny are so present inside a movement that’s supposed to fight against all forms of conservatism, authority and power ?

When she asks some rappers from the “hip hop scene” to listen to her demos, most of them openly gnash their teeth. According to them, the lyrics would be kinda “aggressive”. A little too “anti-guys” for them. In short, a little “too much” for a first album. Surprised, but far from being discouraged, Sara feels even more legitimate to carry on her fight. At the same time, she also have many supporters, such as the rapper Pinokio from the music band Jolly Roger (and the excellent track “Συµπτώµατα / Symptómata”)

In her latest clip “Να σπάσει η σιωπή / Na spásei i siopí” (“To break the Silence”), Sara is sticking to her guns by granting importance to the aesthetics.

As she is saying herself, her “girly” appearance is also a way of spitting at stereotypes. Why couldn’t she be her usual self? Rapping in a dress, her everyday outfit? As incredible as it may sound, to stumble upon a Greek rapper wearing anything other than pants before 2017 (year of the release of his album) was quite rare. Again, the lyrics going with the clip are unambiguous:  :

« The silence is now braking and listen I defend with violence, with dresses and loudspeakers to talk to society, to hate irony that you do not see, you do not know, where do you go? Only macho and thug life image Now supposedly you love women Shut up! It is not fashion it is a movement Remember that!»

Sara now lives in Berlin, where she is planning to release her second album. Needless to say, we look forward to it …

“Feminst hip-hop is the reason I discovered this culture. I’m happy to see more and more women involved in the Greek rap scene. It is crucial for us to talk about the topics that concern us and to claim our freedom, everywhere.”