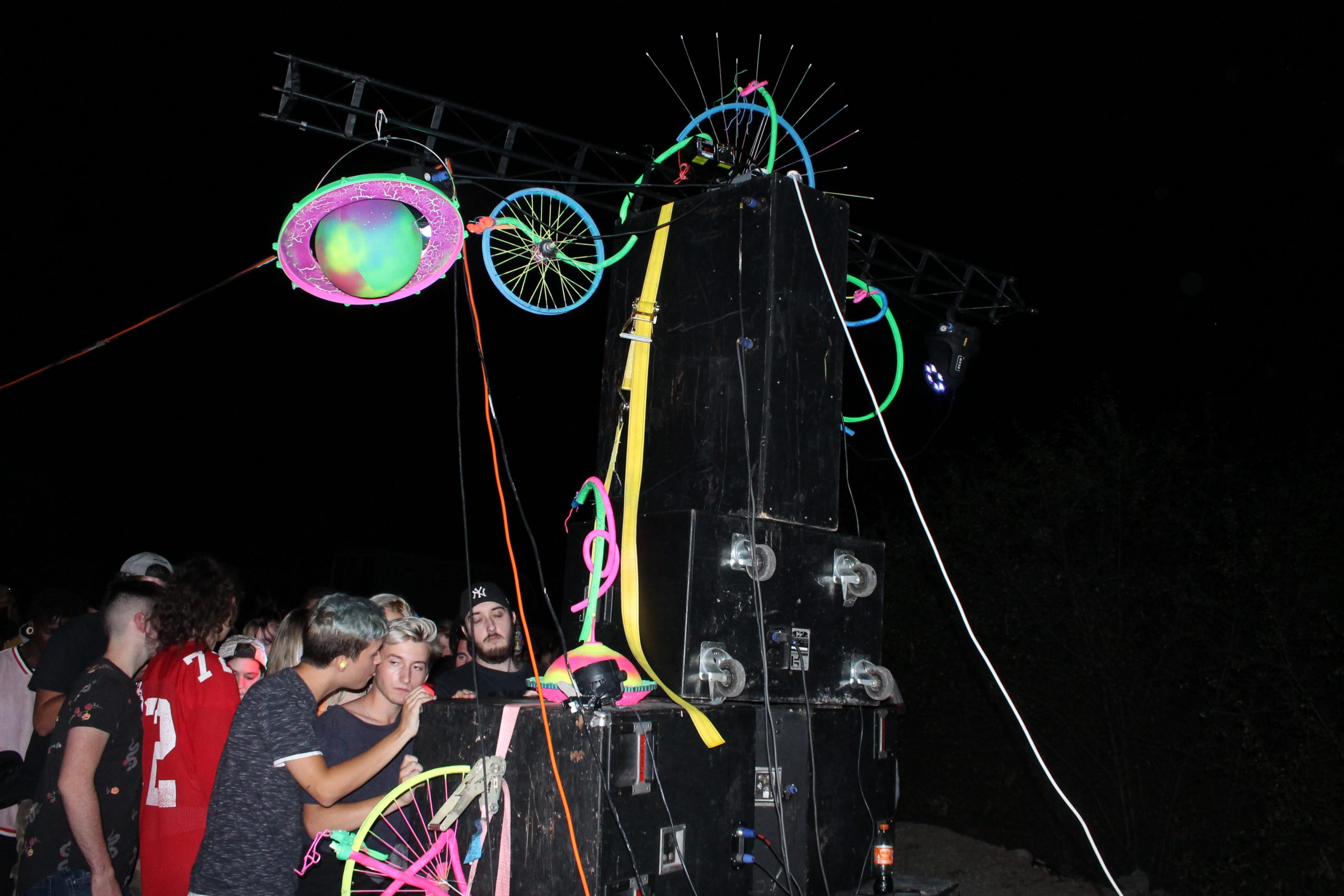 Since the New Year’s Eve party in Lieuron (south of Rennes) last December 31, it is from now on official. Free party organizers are now considered as criminals of the worst kind. Let’s face it: making people dance can cost you 10 years in prison! The situation is serious but the organizers are sticking together and getting organized. It is the case of the Sound System TEK’niciens based in the south of France. Particularly present in the protests, the collective claims it with strength: its acts are as festive as thoughtful, claiming and highly political. | Interview : Polka B. / Trad : Alkistis A. / Photos : TKNC

Can you describe your sound system ? Since when do you exist ?

TKNC exists for two and a half years but we are above all old friends who know each other for a long time. We specialize in electronic music and through our parties, we are also composers, decorators, electricians, bouncers, bartenders, we make beer... risk prevention too! Our goal is to show that even with thousands of people, we can organize ourselves, live, and create without any help from the State. We can certainly share strong moments in a benevolent spirit in total self-organization. For us, this also means concrete applications such as the free pricing policy. We still have many ideas to develop but it takes time! At the moment we are setting up a cultural association which will be called Art’Borescent.

How did you react to the Leurion case ? Did it encourage you to take a more political perspective?

Long before this case, we were already shocked by the liberticidal laws that were coming into force. It was as if health restrictions justified absolutely everything and anything. That’s why we went to protest downtown. The lockdown didn’t benefit anyone. It’s widespread misery! Coming back to Leurion, the penalty for the organizer was outrageous. They wanted to make an example. It made us furious! At the first protest, we had brandished the slogan “10 years for a party, 4 years for a rape”. It’s shocking but it was truly the reality of that week, when another sexual assault case was being prosecuted simultaneously. This parallel is a reflection of everything else. The judicial and media management of the pandemic has been catastrophic. And we are not even talking about the global security law… However, the Leurion story has brought everyone together. At the call of the Maskarade collective, many organizations in support of the accused have been created all over France.

How do you deal with the risk of prosecution? Doesn’t this particularly intense police repression scare you?

We were right on the law because all demonstrations are declared. The right to manifest is a constitutional right, with or without an epidemic! We can’t touch it. In addition, we have the support of the Stop Global Security Law collective and of a lawyer from the Montpellier bar, Sophie Mazas. She knows the law very well and is also a member of the League of Human Rights.

It was great to meet all these activists who are not originally part of our community. When we got to know them, some of them put aside their stereotypes about the free party movement.

They saw that we had nothing to do with the image portrayed by the media (in short, a bunch of drug addicts who just want to tap their feet). It was essential to create all these bonds before our very first demonstration on January 16th 2021.

That day when police confiscated your sound system!

Exactly! The authorities didn’t know how to deal with this demonstration, so they put pressure on us by confiscating our equipment. The prefect made a decree in a hurry saying that he ” was prohibiting rave parties in the city center “. Only, we quickly proved that it was not a free party but a demonstration! Besides, there were about 2000 people and no overflow to deplore. Nothing justified the seizure of the equipment. It was at the end of the demonstration when everyone started to disperse… Moreover, the protest had finished on time! The embarrassing thing for them is that they took everything without giving us a certificate. Yet, it’s mandatory to give a declaration. Thankfully, Sophie helped us! She spent a lot of time on the phone and we were able to get everything back the following week. Police use force by intimidating us to achieve their goals. Most of the time, we don’t dare to react, even though we have rights!

When we took back the sound system the day before the next demonstration, the police told us: “see you tomorrow”! (Laughter)

You haven’t had any problems at demonstrations since?

No! Even if there are big moments of tension sometimes… It’s mostly the police creating it! Like, armed CRS line up at sixty, like this. That raises the temperature for free. It automatically generates a hatred and a violence which does not exist at first... The big articles of the press are worth the detour too. We had “2000 party people without masks, in full trip on the Esplanade”. A lot of nonsense. Needless to say that the vast majority of people had well kept their mask… And it is us who gave some to those who did not have any!

How did you relate your know-how to the format of the downtown demonstrations?

It doesn’t change much! We’re moving, but there’s still a sound system, decorations, people managing the logistics… The big plus is to be associated with people who master this political discourse. We learned a lot. Some of us even appreciate more the protest format than the classic parties. We are even more involved. It’s more open, more touching, more concrete too.

What do you say to those who consider you (at best) as irresponsible, and (at worst) as murderers?

That there are responsible and irresponsible organizers, as in any field. We have to stop with the double standards. There is less risk in going to a small place with 20 people than in standing on a crowded platform of a tramway during rush hour. We are totally against the death of just about everything! You have to keep things in perspective. To be clear: we are personally against holding a party of 2500 people in the middle of an epidemic, but we respect the choice to organize it if it is well done with prevention and awareness about the virus. Covid kills but loneliness and isolation can also kill.

Today (not to mention the sanitary crisis), it has become more and more difficult to party freely in the city centers. How do you see the future of the party movement?

We will have to protect ourselves juridically. Much more than before. The most important thing is to fight not to lose sight of the spirit of the free party movement. Sound systems are not dead since the Covid era… The parties continue. Under a different format of course, but they continue. The future of the movement could also be developed through demonstrations. Before, it was a bit of an exception. The free movement is taking on a more political dimension because everyone is affected. Paradoxically, what is happening now is very interesting.

To continue (and finish) on a positive tone: what is your best party memory?

Our first night at La Soucoupe! It’s a former agricultural museum in Montpellier that closed in 2010 because the State and local authorities didn’t want to finance it anymore (the Agropolis Museum, opened in 1994, NDLR). It was quite crazy. A pirate party of 2000 to 3000 people with the crew Fréquences Libres. Everything was neat, well organized. We have only beautiful memories of that moment… This kind of night makes your heart warm!

Thank you for the interview !

If you want to know more about TKNC, and the recent events in Montpellier, we recommend the excellent documentary Zéro Décibel, made by Farfacid & Carlito.rec.