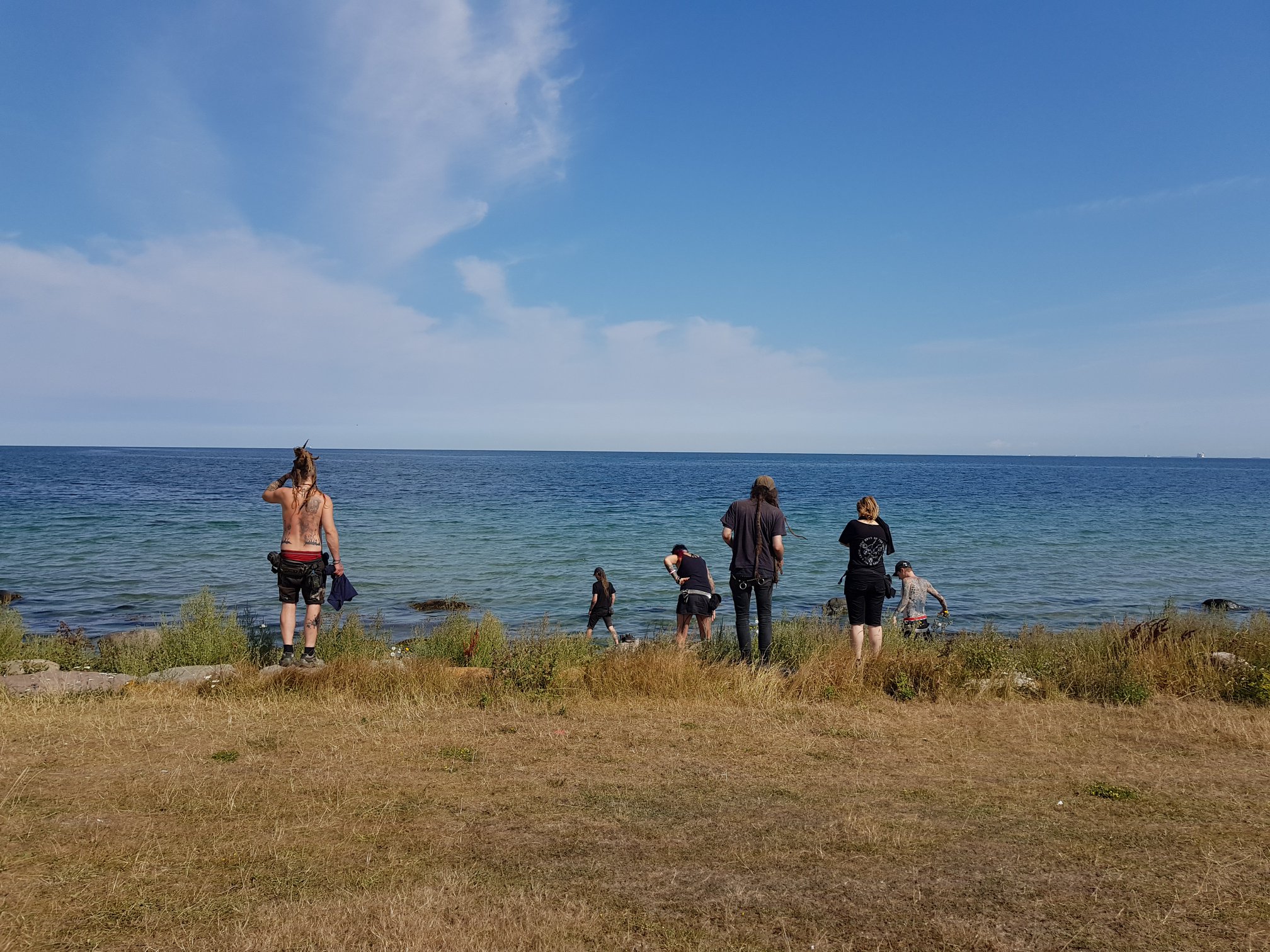 They are beautiful, they are rare. Some bands are able to play everyday in ten countries for more than two weeks non-stop! Formerly based in Liège and now in the Sarthe department, the Matrak Attakk are clearly one of them! True DIY stakanovists, the members of the group clearly don’t do things by half, always at the wheel of their indestructible truck. On the occasion of the Covid “break”, we interviewed Cristina. Always determined, and the word is weak. | By : Polka B. / Trad : Polka B.

Can you introduce Matrak Attakk? How and when did it start and who are the current members?

Matrak Attakk is a anarcha-crustcore band always close to the DIY and squatting scene as we always were close to squats by living or supporting. From 2014 ’till 2016 we were based in Gent and we were more grindish. End 2014, Matrak Attakk was 6 people, 2 guitars and 2 singers. The lyrics weren’t too anarcha feminist yet (as in the same time I had another band that was having only feminist lyrics), but more anti-psychiatric oriented and some lyric were talking about war and post apocalypse, like all crust bands. From 2017 only 2 original members stayed in the band and moved to Liege to reform Matrak Attakk. So the line up you met was formed in 2017, but everybody was playing different instruments. It’s a band with a lot of line up changes. Now a new adventure starts with Py, Cristina and Antoine Frits Man, and we are going to start this right now!

How many times did you go in Northern Europe ? According to the different countries, was it harder than elsewhere to find gigs there?

We went 2 times in Northern Europe and no it wasn’t more difficult, the people and the venues were just less active and slower to answer than others. But a lot of friendly people will just help you with other contacts.

The first time in August 2018, we toured around a lovely festival in the woods called Hygget Fest in central Sweden. And to go there and back we played in Lubeck (Ger), Hässleholm (Swe), Linköping (Swe), Oslo (N), Trondheim (N), Uppsala (Swe), Malmö (Swe), and Bremen (Ger).
In northern Sweden we had a lovely free day with waterfalls and the sun all night long!
We took the ferry and crossed Denmark as there, there was no show possibility for us.

The second time in July 2019, we wanted a longer tour so we decided to cross north Germany again (Göttingen and Hamburg) going to Sweden playing in Malmö, Götheborg, Stockholm, Uppsala, then going to Finland for Rovaniemi, Oulu, Joensu, Tampere, Turku, Helsinki. Then we went down to the Baltic Countries to play in Tallin, Riga and Vilnius. And then in Poland, Bialystok and Pobiedna, and finish with Halle (Germany) to come back! So that was a really nice tour of 19 days and dates. Next time we would like to play in Kiruna (northern Sweden), as we could not last time as it was too far from our route!

You traveled a lot with the band since 2015, because you’re everytime on tour !

The fun started in 2017 with the Liege formation, where we all choose not to work seriously. We also had some friends always coming with us and expanded the crew with drivers and friends coming along and having a couple of songs with us when they wanted to come. No, we are not all the time on tour… I wish we could be all the time on tour !

What struck you particularly in these Scandinavian countries ?

The beautiful landscapes for sure! It’s all immense! We all really appreciated the beauty of the nordic desolated lands and the ‘black metal’ scenarios (Laugh). Also I personally really appreciated the quantity of non binary, women, trans and gendered people we met there and the strong feminist component of some venues! And also, the bands we played with didn’t have a full male line up!

Sweden is known as the ‘d-beat place’ and there are really a lot of bands playing good, they have great sounds. It was awesome to see and hear them (Vicious Irene, Anhedoni, Donde Estas…), that are supported by all the other punks around! In Norway, Akrasia, that we met already in HTH (our ex-home/squat) and they were also haze! I really loved the Finnish scene too! It has some really original bands like Tuhoon Tuomitut and Seurat that I really really loved ! Got really touched by their music. To resume: great venues, great people, like you will find in all the world, but no squats!

What can you say about the squat movement ? Are alternative places “legalized” like most in Germany?

Yes they are legalized and mostly people pay a rent, that for us is really expensive, but there I guess it’s a bit cheaper! A couple of places in the legal way was Freggelberget in Gotheborg but it’s closed now. Nobody we met there really thinks about squatting again, but to preserve their venues and defend their spaces and keeping the scene alive. They don’t have so many venues and the distances make it more difficult for the people there to move and tour and some cities see all their punks moving to bigger cities!

What struck you the most when you got there?

The sun all night long.

How people are still scared of Sovietic Union in the Baltic Countries.

The nature, the evil mosquitoes in Finland (and I am not exaggerating).

the lovely alternative youth of the Baltic Countries !!

Is the crust-punk scene active there?

Yes, especially in Sweden but mostly in the south west part.

Just a few bands in the middle and the east but not so many places for shows. Uppsala has also a more crust/punk scene than Stockholm. In Norway, it’s mostly Oslo and a few people in the forest. In Finland they got a bigger scene. In every case, there’s more people, and more bands, in the south of the country! In the Baltic Countries the scene is more alternative than crust, and metal is more famous.

Culturally, have you noticed any differences in approach between these Sweden, Norway and Finland, at the level of the alternative scene?

It’s hard to fully understand when you are just playing and touring! But it seems like it basically the same way for these 3 countries, no possibilities to open squats, so people organize themselves in youth houses or clubs. A bit like in Germany. Mostly, the people who help you are part of the collective/place who organize the show, mostly also they play in a band. And they have the structures to do something nice, good venues, good sound… I think that like in every country you have the political and less political punks, but up north you have more queer and non binary punks, finally.

In Norway and Sweden, the distances are huge. Is it possible to play in little cities ? Which cities have particularly marked you ?

Distances are huge if you decide to go in the north of these countries. In Sweden there are more possibilities than in Norway, but still, a lot of venues are being evicted or become too expensive for people to keep them ! I was really surprised about Hässleholm. It’s a small city but had a lot of punks attending the show and maybe the best deal for their youth house! Also I was surprised that even Swedish people didn’t know there was a venue in this place! Mostly because the scene is so important in Goteborg, Malmö or Stockholm that people don’t know a lot outside of these cities. So, playing in small cities looks really difficult, as there are no venues, or not enough people to make something.

In Norway we played just in Trondheim and Oslo and there’s not so much more. To play in Trondheim, we didn’t really looked good on the internet maps !

So the day before, in Hygget Fest, partying thinking to have a free day there, we discovered that it was 13 hours driving to Trondheim.

So we had to leave the night, sleep in the forest (that’s an amazing thing of Scandinavia : free camping!) and drive again half of the road!

Do you have some anecdotes ?

Other weird things were meeting some friends from France randomly on a parking in the middle of Norway, meeting Santa Claus in Rovaniemi, touching reindeers, having a sauna and singing in it with people in Lettonia, seeing many bands of teenagers, the enthusiasm of people in Tallin and Riga, the beach behind the social houses in Tampere !

For you, music seems as important as your political positioning. How do you make the connection between your ideas, your music and the way you live everyday?

Well we are all different, but thinking about us 3 in this moment, we all 3 have in common of organizing or playing for benefit shows, making our own merch by screenprinting and selling all free price/donation, being vegan/anti-speciest, skipping/stealing, squatting/supporting squatted places, recording and mixing by ourselves, trying not to support capitalistic causes, not working, living with as less as possible, printing and selling/trading political fanzines, patches.. keeping free shops, recycling shirts and tissues to print our bands/ political designs on them…

How did you adapt the way you live in this context of corona virus?

As you know we even toured in September 2020…

Czech Republic and Poland were ok to go tour and play so we had 16 great days and we are grateful for it, we went also 5 days in end august in France and Switzerland (eheh and guess who was there!) so we did catch the moment to do what we liked. And actually, in the beginning we were quite lucky, living all together, so we could practice when we wanted, and we could record songs for a split tape and a full album. But we were also missing playing shows a lot, and after it was all sadness, we got evicted from our squat, and lost all the easy way of practicing and seeing each other.

And in another way, now that we lost our squat, HTH, I am kind of glad to have a nomadic life again and to not feel I have a base anymore!

HTH lasted 3 years, I never lived so long in a squat nor a house since I am in Belgium (2007) so yes I like moving and playing, and this is happening soon again!

Just hoping, like everybody, that the DIY/ underground music scene won’t slow down after those lonely years!

Can you leave us with a track representing 2021 as well ?

“I want to break free”? (Laugh) Or “The show must go on”! Sorry, we are not really updated with music …