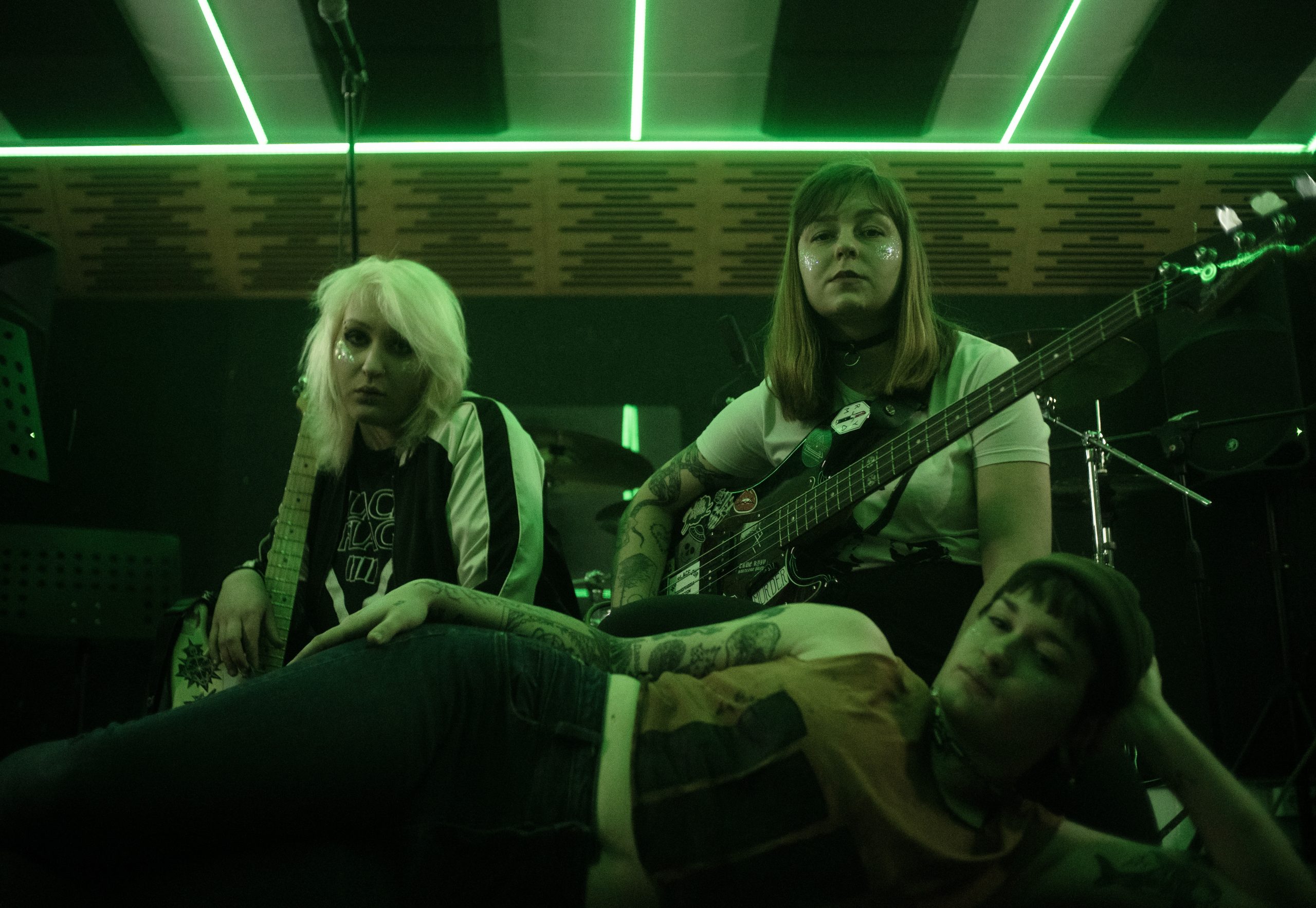 Via mutual friends, we’ve been in contact with two riot girl bands which are igniting the Ukranian’s stages ! The interesting point is that these two bands are coming from two distinguishable parts of the country. Death Pill are based in Kiev (historically closer from the Western Europe) while Häxan are in Odessa and Nikolaïev (situated at the south).

This report does not pretend to make an appraisal about the Ukrainian’s scene. This is more about giving word to small local bands to have a report of their musician experience there. Good reading/listening! | By : Polka B. / Translation : Nino Futur

A huge thanx to Rémy and Alicia K. (translation from Russian to French), and to Noémie from La Barrak Studio (Creuse, Fr) and also to Bo_Nyk from the band Ritual Service (Odessa).

In Ukraine, the DIY punk scene today combines different musical genres. It can be punk rock, hardcore punk, heavy metal of different directions, electronic experiments and different ways of presenting the same message. Dissatisfaction with the authorities, police lawlessness, and people’s unwillingness to disobey and only consume what they are given. Finally, like in any other country, the DIY punk scene will have similarities with the Ukrainian one.

Most often, its possible to find a club or arranged concert venue in cities like Kiev, Odessa, Kharkiv and Lviv. In other cities you often have to improvise, look for abandoned places, art spaces.

But usually, bands don’t care where they play, as long as they’ve loud equipment! For Bo_Nyk, guitarist of the local band Ritual Service : :

“The main thing is that there should be enough people interested in it. It’s hard to judge about the activity of the scene, it has always been, it is and it will be. That’s our country, there are too many social problems for punks to stop being active”.

How would you define the DIY scene in Ukraine?

Natali: Some DIY festivals have developed well these past ten years. The new bands gets a lot of support (financial or moral) from the community, even sometimes if they don’t have made any gig or material ! Punk Rock’s not always about music, skills or quality, but honesty truth and trust (and this is why we’re here) ! Lately some people wanted to control ‘the buisness’ and tried to make profits on the scene. Of course, nothing’s wrong with buying a drink or two or an hotel room and a defrayal on the entries percentage.

But trying to go too far, it’s worsening the musician’s conditions to make profits, and this is a real anti-DIY scam! In some cases it can be really demotivating.

Do you play in squats or only in “official” places?

Marianna : We would love to play squats if only there were any ! Unfortunately, nowadays there is no more in Ukraine. However, we made concerts in unusual places as a skate-park, an abandoned factory… And even one time on a boat that the promoters rented for the gig. They brought their own P.A, sold presale tickets, and prepared their own bar, it was like a punk cruise!

Natali : It is true that there is a lot of « secret places » festivals made in industrial wastelands. Into the covid era this became very regular.

Which cities are driving the scene in Ukraine?

Marianna : After the quarantine the cities came back to life… and it’s good to see! Some have always been dead, but in others the musical scene never stopped. Here, most of the young ones moves to bigger cities for the studies, and when they finish they stay in the city. This is what happen with Kiev, Kharkov, Lviv… This is a really frequent phenomenon.

Natali :  Everywhere’s you can get a stage to play it is okay ! It doesn’t depend on the population nor the proximity with the capital city. In some cities you have a scene with venues and in other absoluetly nothing, this is quite random. In my opinion, the city of Zhytómyr had a big influence on the scene, they organized there for ten consecutive years the « Burn the Scene for Fun » festival. You also have the « Back to Youth » festival in Kalush, here’s two of the most influencial cities. Kharkov and Odessa are more involved into hardcore and organise their own festivals, in Jmelnitski, this is more screamo stuff. There is no punk-rock capital un Ukraine. You only have Loutsk where nothing is happening at all.

How would you define Deathpill’s style?

It’s mostly something like Hardcore/Crossover. One day we made an interview for a british webzine and I really liked the way they described us: “Imagine Slayer but fronted by Kathleen Hannah”. We all listen to really different music, so we will not put boundaries into our composing sessions. After 4 years of hardcore, we started to get bored about it. We like to make music together above all, we like to mix sounds, styles, and tempos.

We have the intention to collaborate with electronical music artists because how punk are you if you limit yourself at only one musical genre ?

What can you say about misogyny in punk rock ukrainian scene ?

Marianna :  I formed my really first band back in 2012 it was pop-punk. I had 9 bands (From Pop-punk to heavy/Glam even pop rock). And all this time (even nowadays), the fact that I an a girl playing guitar was complicated. Whatever the music genre you play. There is still more attention and pressure above you, like if the audience, the technicians are always putting you to you the test like : ‘Come on girl, show me what you got !’ This really exhausts me emotionnaly.

Аnastasia: Personnaly, I beat up everyone who tries to attack me about my sexual genre.

Is the Riot Grrrl musical movement currently developing in Ukraine?

When we strated into the underground scene 4 years ago, we were the only all-girls band. Now I can name you at least 5 bands only composed by girls and several mixt bands. I think this is the real first time that there is more than 6 bands composed by girls in the country. I wish there were more ! Girls motivates girls ! In term of unity in the scene, we all follow each other on the internet ! This is really hard to help each others in real life because we are all from different cities.

What are the tour opportunities in Ukraine? Do you think of playing in other countries ?

Аnastasia: Ukraine’s a very interesting and unique country. Now we almost played all the biggest cities of our country and we want to get, to Europe and share our passion.

Marianna : Henceforward, we will release our first album (finally), and defend it on stage, we will start with the shooting of our first video clip. Now it is complicate to think globaly after this long quarantine, I’m pretty sure now that the aliens will come soon…so before all of this : we have to avail as much as possible and do whatever we love to do.

How would you define the DIY punk scene in Ukraine?

The scene’s quite divided (I don’t talk about rivalities) between areas and cities. We cannot talk objectively about “scene” unto the Ukranian’s territory, because we don’t play music since long time. However we can talk about what’s happening here in the south of the country : homely gigs with a good atmosphere especially in the small town of Mykolaiv. Bands there are pretty good. And concerts more intimist. This is way different from concerts in the cities like Kyiv or Odessa. Mykolaiv’s punk scene is fully DIY and non-profit. The music you have there won’t be in clubs, but more into abandoned places with an organisation made by the bands themselves.

Where do you play generally? Is the scene more or less active than in the past?

We are not that much interested by the financial aspect, we’re more into small concerts with people from the same side and free-thinkers … people from the underground ! After a long stagnancy, gigs are coming back all around Ukraine. Recently we saw some new bands coming up with an all-girl line up.

How did you form your group? What are your musical references? Did you have “role models” in Ukraine ?

Häxan’s a musical experiment that wouldn’t have existed with a different lineup. We only play together since one year, so do our musician experience. Therefore, all our creativity is an experiment in itself.

This is a challenge for us to learn new things.

We all know each other since a long time and the band is our baby. But we wouldn’t have existed without the help of some friends playing in bands of the Mykolaiv’s scene. Our style is free hardcore for women. We learned our instruments by playing covers of Fuses, Kriwewatch we are also inspired by The Iron, Tchernoflot (Чернофлот), Reminded…

Is it difficult for a woman to find a place in the world of punk rock in Ukraine? Can you tell us about your experience on this?

Whatever your genre. If you don’t know shit about music and you dive into it, it is gonna be hard. But nothing’s imposible for a reasonned, willful and perseverant person. The public’s reaction concerning Häxan were not unequivocal. Girls in the scene were not taken seriously for a long time, but these past years the girls band federate more and more attention. The stage’s for everyone !

Is the Riot Grrrl musical movement currently developing in Ukraine?

The idea of the organizer (the Pušča’s lead vocalist) was to gather feminine bands from all genres on the same stage during one day. We all enthusiastically support this initiative.

There is still not that much girls into punk rock, it would be foolish if we were divided.

After our first gig, the band Death Pill contacted us and gave us their support. We weren’t expecting reactions like this and we were so happy about this meeting. We try to stand united inside the country.

What are your goals as a group?

When we started we had no goals to reach. We just tried to learn instruments by playing the music that we enjoy. It was kinda personal. Nobody in the band were expecting the feedback we had during just one year of existence. And after there were new meetings, new opportunities for projects with talented people. Now our goal is to improve our musical abilities, and nurrish the firmness of our personality to create. At last, we’re just a small band who gives its contribution for something bigger. The goal, if there is one, is to contribuate to the movement and the unity. Finding more common things in the inconsistent, and be free by any means.

For us, Häxan already reached its goal : combining the inconstient by love and conscience. We do not want to stop now, who knows what this experience can bring us…