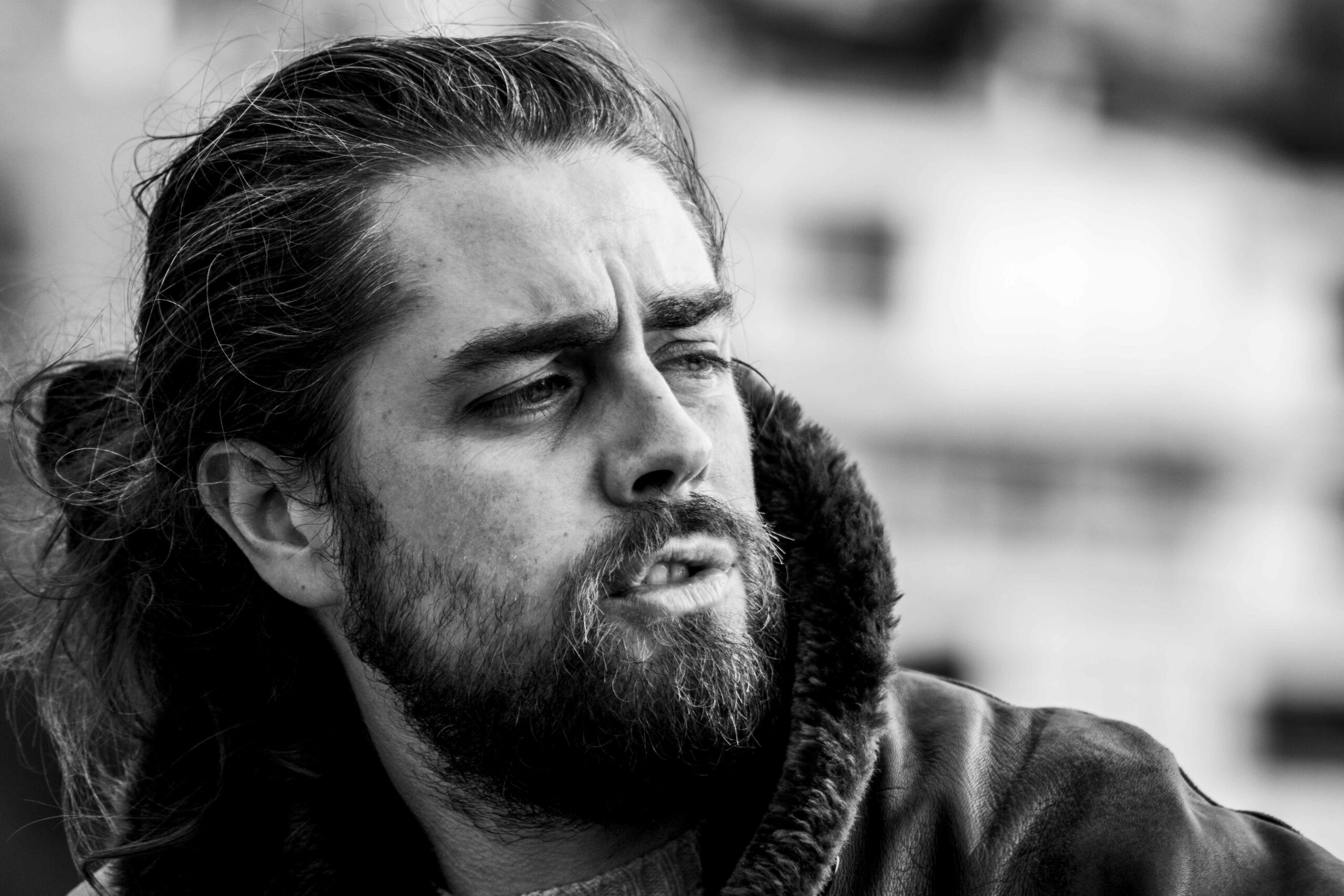 To know Zippo a little better, we could search his name on the internet.The good old Googling routine. We would find a bearded guy with an axe followed by an interview link titled  « Zippo, survivalist rapper ».

In the fuzziness flow, we could see some kind of lumberjack rapper decided to make his return to the land. Or something like this.

The complex universe of this rapper from Nice cannot be reduced to this : listening to this album, asks for attention, time, and réflexion. All that we lack on a daily basis… and tha’s the main theme of Zippo contre les robots.

| Written by Polka B. & Translated by Nino Futur

On this artwork painted by Marion Aubry, Zippo leaves the realism of his past album covers to enter into the machines world.

Lost in a maze of digital circuits, subcutaneous chips and electronic implants, here we are ready for the i-world.

An universe where placed under control, we’ll content to accept our fate, dazzled by multicolor light spectras that blind us as much as it gives us pleasure.

Accepting your fate and finding pleasure in your own downfall… for real ? How can we be used to accept this « brave new world » ?

Visionary in more than one track (it was out in 2018), the album could have been the lockdown’s original soundtrack. During one album, Zippo come back to the heart of huge cities.

Surrounded by a mass of anonymous workers, he feels lonely, immersed ino a predictible and banal life, regulated into the mechanics of the working world.

Well tight « tie knot » , the rapper extend the coherence of his project, initiated with his band Le Pakkt in the early 2000’s. As always, he haw the gift to say alot in a few words :

In the continuance of his past project « Bucheron » (« Lumberjack »), Zippo persists: if mass consumption is valorized, what about people who creates? The ones who are sweating bullets, who question themselves, put themselves in danger ? Considering that it’s « complicated to see our wireless leashes » (« L’homme à la tête creuse ») the social networks and applications addiction is also responsible :

« Before learning o think, people dives into normalcy
a torrent of lies where life only gives ideas to serve the display of our social networks feed  »

Enough to cheer us up.

During the 15 tracks discussing unpleasant topics, Zippo manages to never weigh down the mood.

First thanks to a certain artistic requirement juggling between different  flows, and musical aesthetics that go beyond the classical nineties boom-bap style (the cloud rap influence of « La mer monte », the very Chicago drill arpeggios of « Hémorragie »…).

In this one, Zippo recounts his experience as a temporary worker at the Cannes festival bar. Exhausted, sored and armed with a pallet truck, he « move tons », well conscious that he is as visible as dust. Who would care about a simple cog dedicated to a much greater machine?

From a sudden point of view upheaval, the temporary worker suddenly becomes the true artist.

In short, the album is delightning. Far from the victim or preachy posture (that’s the whole risk with this exercise), Zippo’s songs seem above all conceived as mantras. Formulas of salvation coming to give consistency and coherence to one’s own life choices. Forging a critical mind. Create more than consume. Do not get enslaved. And over all : escape a sanitized life where everything seems programmed.