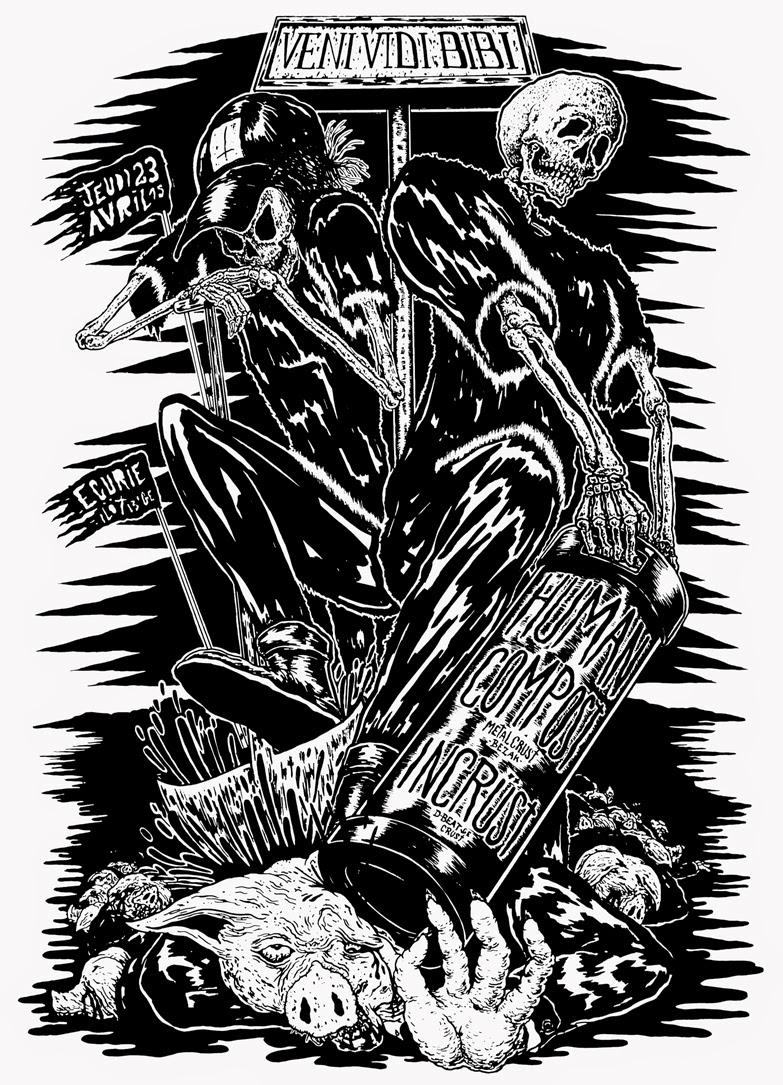 Like many concert fanatics, we got to know Thomas Perrodin through his posters for l’Usine, la Cave 12 and l’Écurie, Geneva’s alternative culture hot spots! What strikes you at first, is of course the retina-shattering effect they have, like the magnificent cover he made especially for this issue (thanks to him!). Apart from his pencil stroke, he is also someone who thinks a lot about his practice, the way he conceives it, experiments with it and exercises it in real life, always in a very constructed political gamble. Closer to the real world than to conceptual theories.

Protect your pupils and enjoy reading ! | Interview by Polka B. / Trad: Teaumar

You grew up in Paris, and you discovered Geneva’s alternative life in the 2000s. Were you surprised by the creative bubbling of the local underground scene? How do you explain it?

Thomas : It’s true that when you’re not Swiss, you immediately have this image of banks and chocolate! But you quickly realise that the political system is federal. There is a very old tribal system which means that the populations have separated to avoid hitting each other at a given moment. This heritage, combined with an ultra-liberal delirium, inevitably creates another extreme that opposes all that. Squats have another image, it’s closer to the German vision. They are not people who occupy a place, but rather people who “occupy” a place.

I arrived at a very particular moment when the two biggest squats in the city were being evicted: the Rhino and the Tower. Everyone was getting angry. A rent system started to be set up. I thought the city was very cool because of the energy of the alternative scene, but later I realised that a page had been turned and that this vitality was the result of a golden age.

In the 80s, there were about 200 occupied barracks in Geneva! It was a bit like that everywhere in Switzerland…

Via the Crache-Papier silk-screen printing workshop, you are very involved in the life of the Usine. Today, it is a “legal” alternative cultural centre, but it carries the values of self-management, with the squat heritage you just mentioned. What about in 2021? What do you think about it?

The Swiss mentality has an advantage. In their way of thinking, you can use the argument of consensus and collective decision making to delay the response time required by the state (Laughs)! Like: “we’ll let you know when we’ve made a decision”. So you can extend things over time. The Factory used this to avoid becoming something it didn’t want, by being institutionalised like many industrial wastelands. As we speak, the Factory is still not a place with offices and a boss who manages his associations like employees. There has been a transmission of values from generation to generation. The houses no longer exist as they did at the time, but the ethics have remained. The spaces are very accessible. The political values are still in place (no racism, no sexism, no homophobia) and the beers are cheap. In itself the Factory is changing, but very slowly. And that’s for the best. After that it all depends on what you do with the space… It’s not enough to be at the Usine just because there’s a heritage, and just because “it’s cool.”

As an illustrator, how has this effervescence influenced you? Why this love for concert posters?

I can’t separate this world from my practice, that’s clear! There is no financial objective when I make posters. I just think about how I can support the scene because I love it so much. I try to have as much fun as possible and to find myself financially on occasion, by selling a few things at micro-publishing festivals for example. I think it’s a mistake to turn things down because they don’t pay.

When you do things that you like, you meet nice people who will open other doors for you, and you will always end up with something. It’s not all about the money you get at the time. A lot of positive things start to happen when you enjoy doing things.

Concert posters are also my way of participating in the life of the community. Music is an integral part of my life. I have always found it much easier to illustrate music than cinema. I have this affinity. I have the energy for it. At the beginning I was doing some for friends, and then a lot of people asked me for some. When you’re independent, you have the luxury to choose! There’s a political spectrum in everything I do; I don’t feel like I’m working for the wrong people. Even if there are always disagreements between people on the same side, I consider that we defend the same values.

In this context, can you defend your own style while adapting your creations to particular musical aesthetics?

I went to art school in Angoulême and there I met people who spent a good part of their lives “finding their style”. For my part, I was more focused on the image in general. I was focused on my ability to create moods that fit into specific worlds. I would have been bored to dig in a single direction. I quickly got a taste for crust and hardcore posters, because that’s also my universe in Geneva. Besides, I like this community. I find it inclusive. It defends a lot of healthy values without proselytising politics. When I illustrate noise and more experimental creations, I don’t go about it in the same way, because these types of music have fewer visual codes. In short, I adapt, and I have as much fun doing one as the other. What I like about this non-professional relationship is that I am totally free. I’m not paid, but I have carte blanche.

Do you also try to provoke reactions?

Absolutely. I’m not in the picture just for the picture. As the posters are put up in the public space, they have to provoke a reaction. That something happens, that it questions people.

I once did a poster for the group Psychic TV. Their logo is a sort of slightly enlarged cross of Lorraine with a vertical bar and three horizontal bars. It was quite provocative. I put a background with the colours blue, white and red on top of it, to push the thing. It was really a hard poster. You didn’t want to have it at home!

So I had young activists looking for me in most of the bars in town! In the end, my older antifa comrades explained to them that I had played on these codes on purpose, and that there was no problem. All this to say that I don’t want to censor myself.

When we see your exhibitions, we notice that the DIY scene is very close to your heart. You seem to consider it as a culture to be defended, beyond styles and chapels. Am I wrong?

No, you’re not wrong. When you see the technological evolutions, you can think that everything is possible. That you can do absolutely anything. But the principle of DIY is to realise that you can’t do everything. You can only do what you have… and that’s already a lot! The possibilities are not diminished, on the contrary. I have this approach in my practice. At the Crache-Papier workshop, I explain to people who come to see us that we have constraints. We are not printers. We are at the disposal of the Usine’s associations and people who don’t have much money. We make do with the material we have. Most of the time, it’s salvage, but that’s not a problem. The most important thing is to do things. To experiment. To see what happens. There’s no point in theorising for hours on end. It doesn’t matter how much training and background some people have from art schools. I’m not interested in the conceptual. Do it first, and you’ll get something out of it. Personally, I get a lot of creativity out of doing it that way. We could have better material, but would that make our productions better? I don’t think so. And I’m not interested. I’m not a nerd.

We’re in the business of getting by, in the moment, in the good feeling we have with the people we meet. You have to see each other, you have to talk, you have to do things together.

What kind of music are you listening to at the moment?

Right now I’m in my Griselda Records phase, with rappers like Conway and Westside Gunn. It’s reconnected me to old school rap, built around soul samples. Roc Marciano too! I listen to old people rapping old people’s rap, actually (Laughs). Ethically, I don’t find myself in all the lyrics, but the sound is really incredible.

Finally: your biggest slap in the face live at the Usine?

It’s hot! I have so much… I would say Swans.