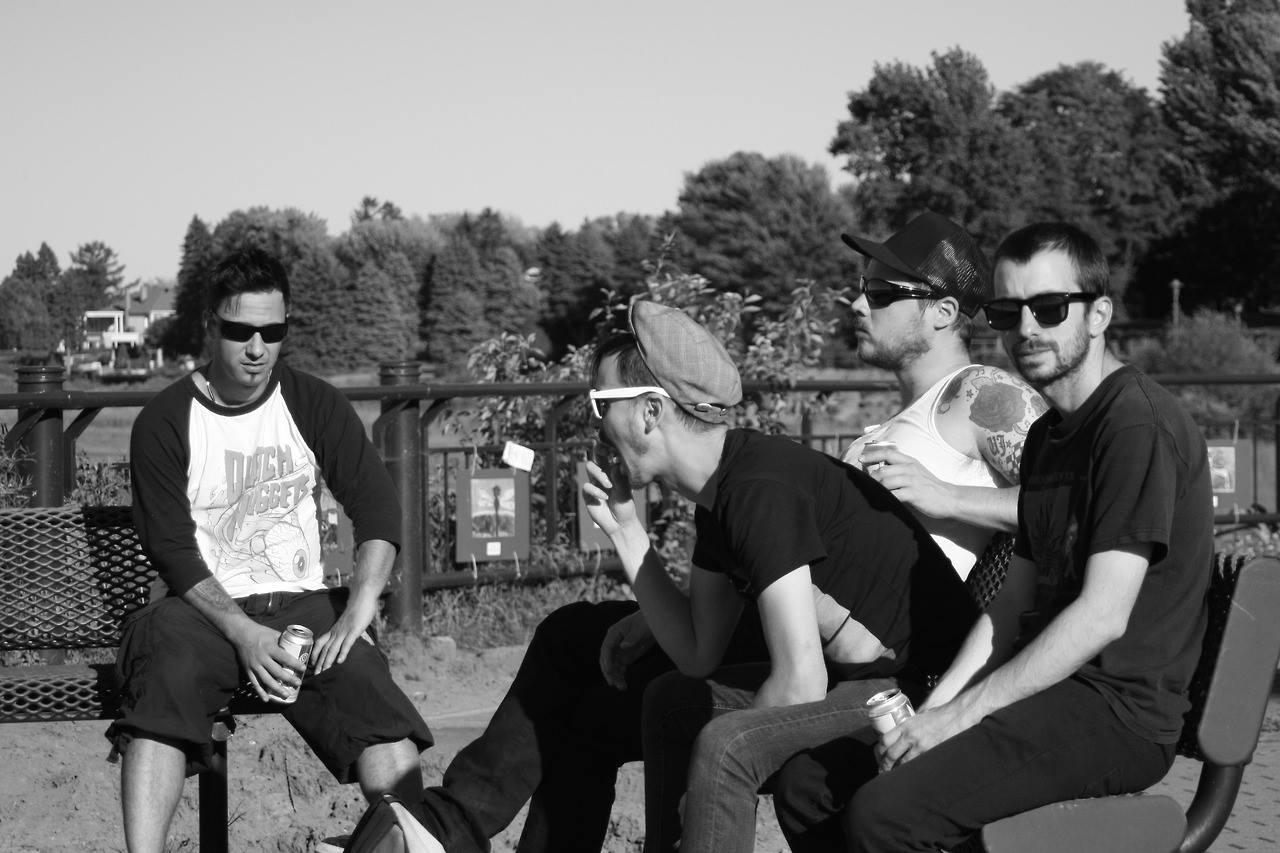 As one of the longest-living group in the Paris ska-punk scene, the trio Union Jack has never given up. And it’s been 22 years! Bars, squats, small stages, festivals in France and abroad … and many trips to Canada! At the time of the release of its 8th album (Violence), we asked the group for a little feedback on its tours. | Interviewed by Polka.B (Trad: Chris P.)

How many tours have you done in Canada? How did you get the opportunity to go there for the first time?

Ben: We’ve been on tours there in 2010, 2013 and 2017. Our friends from Guerilla Poubelle had already done that. They helped us get in contact with the Quebec band The Hunters, and we went on tour with them.

Antoine: We knew that we would have to put our hands deep in our pockets for the plane tickets. The goal was to balance our budget, not to lose any money. The band there had its own van and its backline, and that helped! In the end we did not lose that much..

Whats marked you when you arrived?

A: At that time, it was a bit intense, because you were supposed to have a work permit to be able to play. We had to enter in secrecy, like tourists, without any distinctive sign.

T: They went too far. They would pile you up, one by one in small rooms to find out what you were doing in Canada. There were even trick questions! The thing was to have a believable, pre-made story. And an address to communicate on site, of the people who would host you. People who really exist, of course !

A: That was not just paranoid. On their second tour, Guerilla Poubelle were caught. They were sent back to France, directly! It was not fun back then. It was enough for only one member of the group to get busted, for everyone to leave. Some groups even flew on different flights. Fortunately, all this has changed recently … You just have to prove that you do not earn too much money. They differentiate between those who make a salary, and the self-employed like us. Basically that’s it.

How does the Canadian DIY scene conceive the reception of groups? Is it different compared to France?

B: It depends if you are in the french-speaking zone or in Ontario. We were rather in the English-speaking part during the first tour … and we had a hard time! We slept in the truck almost during the whole trip. Hosting is not their thing. At the end of the concert they juste tell you “ciao”! Moreover, the American bands are impressed on the level of hospitality when they come in Europe.

T: That’s pretty amazing. The worst thing is that the guys want you to be well and they are very cool. They do not think like Europeans, it’s another culture.

A: But it’s important to know that, because the distances are huge. It’s not Tours-Paris! Can you imagine one night, to be lost at 2,000 terminals? “See you later guys!” (Laughters)

B: Strategically, we went there in september and may. It’s better ! (Laughter)

T: To come back to DIY, the codes are pretty similar. Especially in Quebec. Many independent bands have already come to play in Europe. They tend to align with what they experienced during their tours.

What was your state of mind ? Is it possible to arrange a little bit of time to pay a visit despite the distance?

B: One year, we made it to the Niagara Falls … But it’s true that it’s a bit of a race. You are more likely to find yourself in big cities. Where we hanged around the most is Montreal and Toronto.

T: We were a little frustrated when we arrived there. There are insane landscapes but you have to hit the road to get to the next gig. Last time we still had to do it. It was raining hard and we went to get lost in a national park. The rangers have taken us for crazy guys !

A: Again, their relationship with the roads, has really nothing to do with ours. When we asked a local what could we do in the area, he sent us 500 km away. And he was serious! (Laughters)

Did you had any problems crossing the border?

B: Crossing the US border with a van and stuff … we were frankly advised against it. Everyone told us that it would be a real struggle. Anyway, we did not have time. Niagara Falls were nearby, but it was not that interesting. We preferred to go back to Toronto.

T: We never wanted to play in the United States. The roads are endless, the conditions are not ideal, the competition is enormous … It is rather precarious. Our friends from Breakout felt this experience. On the other hand, it can be clever if you are touring with a local band there, that you identify with.

Which concert spots come back to your mind?

B: There is the TRH-Bar in downtown Montreal which is pretty crazy. It’s a three-floor bar. Inside, you have a stage for music, with a bowl and a ramp where you can skate on the spot. Normal!

T: The ramp is huge and it’s impressive. We had finished our last tour there with the band PL Mafia. They had sprayed us with beer during the last piece, it was chaos. Big shout out to them ! It reminds me of another place in Montreal which is called Katacombes. A great room that has a soul! At the end of the concert, the PL Mafia gave us their fees. It really touched us. They said they were at home and that we needed the money more. Very few bands are able to do that. Thanks to this, we managed to get by on this tour. We also advise that to the Pouzza Fest, also in Montreal … they “forget” sometimes to pay the groups, …but, ok ! (Laughters)

After three tours, what is your ideal trip?

B: In Ontario, we focused only on Toronto. The city is very cool! But sometimes, we just focus on the Quebec part. There are already a lot of things to do.

T: We really appreciated the state of mind of people from Quebec. They put you at ease on any occasion. It’s relaxing.

B: Even in the case of logistics-related difficulties, they will always find a way to solve the problem. There has never been a stressful situation.

What did you think of the Quebec public?

T: It’s a benevolent audience that doesn’t give you any grief. Very good atmosphere ! I don’t think there is a “difficult” audience depending on the city, like in Europe. At Pouzza Fest, we didn’t give out best performance, but the audience was super hyped. With the years, we are lucky to feel associated with that place.

Do you have any canadian groups to recommend?

T: The Big Brother from Toronto, Lost Love, Body Heist, Bhat, Filthy Radicals, Mafia PL, Bad Crow… Unfortunately, since 2010, many bands no longer exist. We must say that the scene took a hit.

B: It is the same situation in France. The public is aging. Bands too, inevitably!

T: It’s linked. When you have new blood in the bands, it unites another generation.

A: As a spectator, you project yourself to that! If you only see old people on stage, maybe that will make you less inclined to be there.

T: Watch out for Ontario restrictions on selling alcohol!

B: You still have to want to come to play in Canada. You must anticipate the tour and be very organized. But it’s worth it!